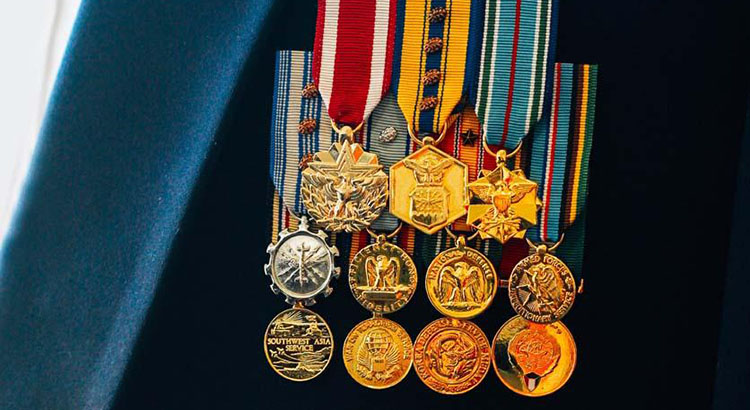 Veterans who have retired or received an honorable discharge from the military, as well as current military personnel, are encouraged to wear their miniature medals and proudly display their military accomplishments.

Miniature military medals are typically half the size of full-size medals and, unlike their full-size counterparts, they are not issued but purchased separately.

In the United States, the tradition of wearing medals caught on later than it did in Great Britain and other allied countries. However, since the Secretary of Veteran Affairs began to encourage service members to take part in the Veterans Pride Initiative in 2006, miniature medals have become a traditional part of celebrating military holidays in the United States.

Because it is a relatively recent development, you may have wondered: When can I wear miniature medals? The following guidelines can help you determine when, where and how to display your military pride.

Days of celebration with a military theme are the perfect time to display your achievements by wearing military medals.

Veterans Day, Memorial Day, and Armed Forces Day in the United States are just some of the occasions you can choose from, while in Canada and Great Britain, miniatures should be worn on Remembrance Day.

Though wearing medals is highly encouraged for these yearly celebrations, keep in mind that there are some etiquette rules to consider when wearing your medals. For example, even during a military event, it is never appropriate to pair medals with casual civilian clothing or wear them in an atypical manner, such as on the sleeve or at the waist.

Again, make sure you are wearing your medals appropriately to honor and respect the oath that you and millions of American servicemen and women have taken. Only wear your miniatures with formal civilian attire, such as a suit jacket and pants.

Although it is not necessarily a rule, the key to differentiating between full-size medal events and miniature medal events mostly comes down to the time of day. Miniatures are typically reserved for very formal events that require full evening or dinner dress and take place later in the day.

Black tie, or dinner attire, is the formal attire that is most often worn for ceremonies and events such as most wedding, dinners, galas, and charity events.

To wear your mini medals with your black-tie attire, place your mounted medal set on the left side of your jacket. If your jacket has a pocket, your set is best placed 1/8” above the pocket. Alternatively, if your miniature medal rack is smaller, it may be placed on the jacket’s lapel.

This applies for female service-members as well.

For those who have earned a military star (i.e. the Medal of Honor), this can be worn around your neck with the badge falling just below the knot of the tie.

If you only have a full size set of medals, it isn’t the end of the world to wear them to an event, especially if it is last minute. But if you do have time before the event, use our online medal builder, or call a Military Awards Specialist.

Many veterans attend, host, or participate in events that do not require such formal attire. Events such as: public speaking engagements, giving sermons, or attending parades and performances are a great opportunity to don a blazer, sport coat, or a polo and sport miniature medals.

While no federal law mandates exactly how U.S. military medals should be worn, each branch of the military has uniform regulations that can help you determine how to wear your medals properly.

If you are new to wearing medals, always double check which ones you are entitled to by requesting a copy of your DD Form 214 to ensure you are complying with the Stolen Valor Act of 2005.

By following these simple rules of etiquette concerning your military medals, you can proudly and accurately display the commitment and achievements of your military career.