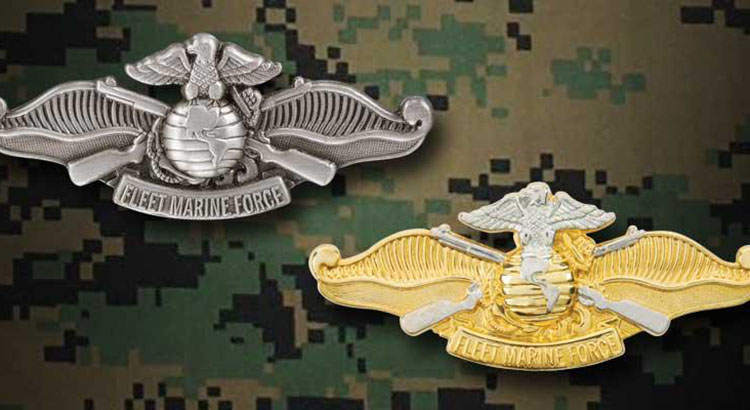 A Fleet Marine Force (FMF) badge is an outward signal of a sailor’s dedication to bettering themselves and committing to every aspect of their career as a sailor as well as their partner service, the United States Marine Corps.

While there are more than 30 warfare designator pins and numerous other navy badges that can be earned by those who serve in the Navy, an FMF sailor stands apart from their peers. This is because it designates that the sailor has taken it up upon themselves to commit to being a year-long member of the Fleet Marine Force.

The challenging course is designed to instruct sailors in everything Marine Corps like rank structure, history, field communication, tactical fundamental procedures, security fundamentals, and so much more.

It allows a sailor to more thoroughly understand the methodologies of the Marine Corps and better support its ongoing mission.

The prestigious honor signifies a rite of passage that was obtained by completing demanding hours of study to pass rigorous exams and evaluations as well as remaining dedicated to excellence throughout their Navy career.

Not all sailors are eligible to earn the Fleet Marine Force badge. Only those who are attached to Marine units that are forward-deployable can pursue the badge.

Any sailor who wishes to obtain their FMF badge can begin pursuing the requirements the day they arrive at their designated Marine Corps unit. However, they must belong to a combat element of a Marine Expeditionary Force that is operational for at least one year before this and meet various physical fitness standards.

There are three types of Fleet Marine Force qualifications: officer, enlisted, and chaplain.

Fleet Marine Force officer qualifications place a greater emphasis on larger issues that affect the Marine Corps while enlisted FMF qualifications are aimed at the small unit level. This is because, unlike officers, enlisted sailors are tasked with lower level commands and work personally with Marines. Fittingly, this means that their qualifications are focused on aspects such as weapons, combat, fighting positions, and field communication.

How Is it earned? 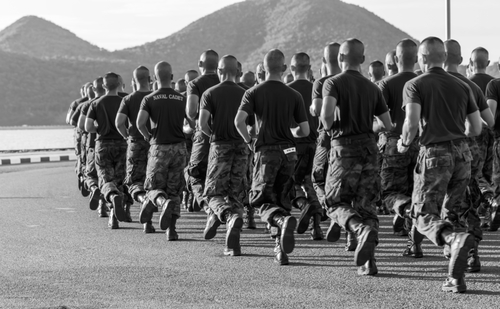 A sailor pursuing their FMF badge is required to take and pass the Marine Physical Fitness Test and qualify on the rifle range. This is typically a deceptively easy first step for many sailors who are familiar with physical fitness testing.

Upon arrival at the Marine Corps Unit, Navy personnel who want to earn their FMF badge are provided with a Personal Qualification Standards textbook. This more than 400-page book effectively functions as the handbook and contains knowledge ranging from land navigation tactics to profiles of some of the most distinguished Marines throughout history.

After obtaining the text, the sailor must present themselves to a non-commissioned higher-up who is familiar with Fleet Marine Force and receive instruction on one or more topics of Marine Corps knowledge that will be tested. This can include anything from weapon fundamentals to first aid and field sanitation fundamentals, and familiarization to combat communications.

Once the instructing Marine is confident the sailor possesses an excellent understanding of the material, he or she administers a verbal exam and practical application of the skills studied. If the sailor passes these exams, they are given a signature of approval for that section of their Marine Corps knowledge acquisition. 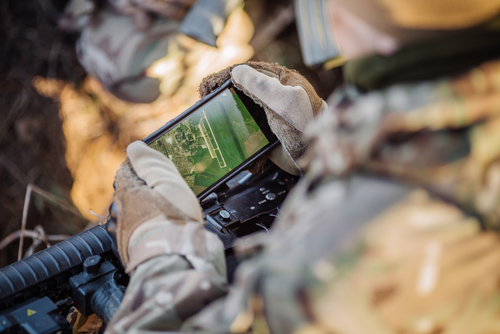 The knowledge and skill acquisition process typically lasts eight to 11 months, after which a written test is administered and a board of senior and high-ranking NCO marines and sailors who are FMF-qualified is convened.

Fleet Marine Force boards consist of two distinct parts. The first section is a rigorous examination of the sailor’s knowledge of the Marine Corps, including the Marine Air-Ground Task Force and its subordinate components, Marine history and Marine customs and courtesies. The sailor is only permitted to move on to the second portion if the first is completed successfully.

The second section of the oral exam consists of a thorough oral examination pretraining to the platform that the sailor is assigned to. For example, a sailor belonging to the Air Combat Element is tested on various aspects of Marine Corps Aviation, from the names and operation of different aircraft to the members of a MAW squadron.

If a sailor can successfully complete the physical fitness, knowledge and skills acquisition and boards portion of the qualification, they are awarded their Fleet Marine Force pin.

However, in order to keep this prestigious achievement, they must also work to maintain it through continued physical fitness, combat and rifle range testing.

Marines say that military badges are always earned and never given. The successful completion of the rigorous testing that a sailor undergoes to earn their Fleet Marine Force badge proves this to be true.