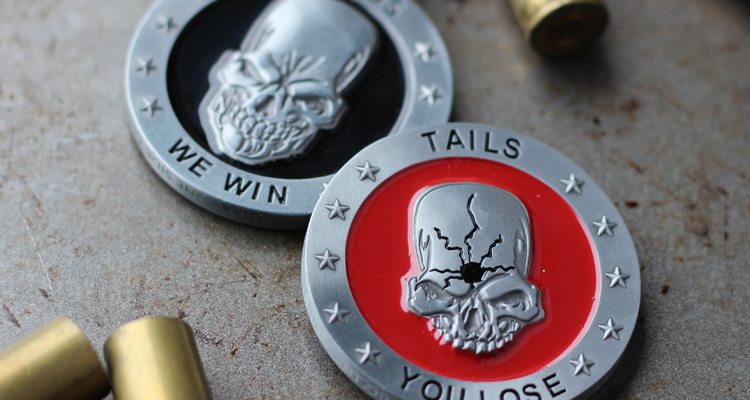 Challenge coins first appeared when the Roman Empire ran the world and soldiers received them as awards for their service. If this tale is true, it’s reason enough to treat these medallions with respect and find the perfect challenge coin display case to show off these tokens of honor.

This guide is designed to help you choose the right challenge coin display case to show off your collection. Your challenge coin collection says a lot about your hard work and service to your country, so you’ll want the best case to keep it safe.

What is a Challenge Coin?

For the uninitiated, it’s good to know just what challenge coins are and what they represent. The name might be a bit misleading. Although they’re called coins, they can bear little resemblance to money. They’re usually an inch and a half or two inches in diameter and a tenth of an inch thick, but they can vary widely in size and shape. They can be forged in the shape of a ship, a military dog tag or a fifty-cent piece, for example. It’s all up to the organization that has them designed and made.

The important thing to remember is that they signify membership in a group—a branch of the military, a particular Air Force squadron, an Army tank group or any number of military or civilian organizations. They can serve as a “challenge,” if desired, to verify that someone belongs to the group, but more commonly, they’re used as rewards for outstanding achievements or as an honor bestowed on visitors to the group.

The History of Challenge Coins

Despite the Roman origin story, which is the most romantic, most people think challenge coins were first given during World War I as a way to distinguish members of a flyer squadron.

The story goes that one of the pilots was shot down and captured by German soldiers. They took all of his identification except the challenge coin. He escaped and avoided recapture by wearing civilian clothes and managed to reach the front lines where he found an outpost manned by French soldiers.

Unfortunately, the French had been fighting off saboteurs dressed in civilian clothes. So there the pilot was, looking like the enemy and with no ID except his challenge coin. He almost lost his life to execution.

Fortunately, he had the challenge coin, which he showed to his new captors. One of them recognized the pilot’s squadron insignia on the coin and held off killing him until they could verify his identity. Instead of dying, he ended up sipping wine with his newfound friends. And, after that, all the pilots in his squadron decided to carry their challenge coins with them at all times.

There are other possible origin stories as well, including one set in World War II. But enough of history– let’s get on to challenge coin display cases.

Why Does Anyone Need a Challenge Coin Display Case?

Over the years, challenge coins have gone from a means to identify with a group, to becoming collector’s items. In other words, you don’t have to belong to a particular group to appreciate the elegance, artistry and historic value of a 50th Anniversary Vietnam Challenge Coin or a Desert Storm Veteran Challenge Coin, for example. Challenge coins have now become collector’s items, for the brave men and women who earned them, as well as for others, which means they should be nicely displayed in a case.

The point is that these medallions are often—to put it simply—beautiful. They deserve to be on display, not hidden away in a drawer. And the display needs to live up to the honor of holding these symbols of service and, often, courage under fire.

Medals of America offers a variety of different challenge coin display cases so that you can select the one that’s right for your collection. Each provides a dignified setting for the coins and helps keep them out of harm’s way.

Next, we’ll give you the details of three of our favorite challenge coin display cases so that you can find the perfect one for your collection.

Made in the USA, this coin display has it all: the warm look of wood, the Stars and Stripes as a background to the coins, and the ability to show them off in all their glory. This is the perfect case for large collections, as it holds 60 coins without looking a bit crowded. Plus, its unique design makes it the perfect wall hanging for home or office.

In this display case, the challenge coins lean against the display’s backboard and are held in place by slots in the shelves. The slots are designed to hold even the thickest coin in place so there are no concerns about coins falling off and getting lost.

The Wooden Wall Flag Coin Holder can also be personalized. Custom laser engraving is available to add another level of individuality to the display. The case measures 19-1/2”H x 32”W.

This tabletop display case—created from luxurious walnut wood—is the perfect way to show off your collection of challenge coins when you don’t have extra wall space. Ideal for a desk, mantle or shelf, the Walnut Slant Top Coin Display allows you to arrange as many as 80 coins to be admired. However, the discreet coin slots mean that your case won’t look incomplete if you have a smaller collection.

This case, hand-crafted from walnut with a black background, features a hinged door with a solid glass front. The solid wood shelves are fabric-covered and contain grooves to hold the coins in place. The case comes in two sizes and can accommodate from 32 to 48 coins.

If desired, this challenge coin display case can become a wall hanging. The hardware is included.

The American Walnut Challenge Coin Display Case provides optimum protection for its contents. And it does so without compromising the coins’ beauty. It’s the ideal addition to any home or office.

Why Collect and Display Challenge Coins?

America’s history is full of conflict. During the almost 250 years since the signing of the Declaration of Independence, this country has been involved in 12 major wars. These wars have claimed almost 1,200,000 American lives. The conflicts have brought out the best and the worst in human nature, revealing heights of courage and self-sacrifice and depths of cruelty and inhumanity.

Challenge coins are a way to commemorate the best in the people who have served—their loyalty, their willingness to give their lives for each other and their country. In other words, these coins are much more than nice looking pieces of metal. They are representatives also of the finest characteristics of American men and women, whether they have served in the military or have simply done their best to support their nation.

To own a challenge coin is to possess a part of United States history, a reminder of what Americans can be when they face even the greatest of obstacles. Challenge coins deserve to be a part of every American’s life and to be displayed with the dignity they so richly deserve.

Medals of America proudly makes challenge coins and challenge coin display cases available to everyone. The company’s owners, who are themselves veterans, pledge to provide products of the highest quality and value.