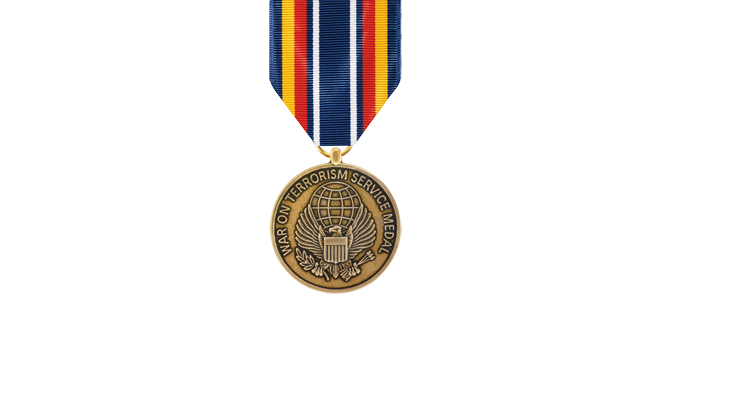 If you missed part 1 and 2 of this Global War on Terrorism Service Medal post you can read part 1 HERE and part 2 HERE.

Instituted: 2003
Dates: 2001 to present
Criteria: Active participation in, or service in support of Global War on Terrorism operations on or after 11 September, 2001.
Devices: Bronze Star

2001 and a date to be determined at a later date. This military medal was established by an executive order signed by President George W. Bush on October 28, 2003. Initial award of the Global War on Terrorism Service Medal will be limited to Airport Security Operations from September 27, 2001 until May 31, 2002 and to Service members who supported Operations ENDURING FREEDOM, NOBLE EAGLE and IRAQI FREEDOM. Further approved operations will be designated by the Secretary of Defense in consultation with the Chairman, Joint Chiefs of Staff on a case-by-case basis when requested by Combatant Commanders.

Although qualifying circumstances would be extremely rare, Battle Stars may be applicable for personnel who were engaged in actual combat against the enemy under circumstances involving grave danger of death or serious bodily injury from enemy action. Only a Combat Commander can initiate a request for a Battle Star.

The Global War on Terrorism Service Medal was designed by the Institute of Heraldry. The medal is a circular bronze disc which displays an eagle, wings displayed, with a stylized shield of thirteen vertical bars on its breast and holding in dexter claw an olive branch and in sinister claw three arrows, all in front of a terrestrial globe with the inscription above, “WAR ON TERRORISM SERVICE MEDAL.” The reverse of the medal displays a laurel wreath on a plain field. The ribbon is scarlet, white and blue representing the United States; gold denoting excellence.

Where to find the Global War on Terrorism Service Medal

To shop for the Global War on Terrorism Service Medal or military ribbon visit Medals of America.

We also offer a large selection of military patches, military tags, and badges as well as military rank, rates and insignia.