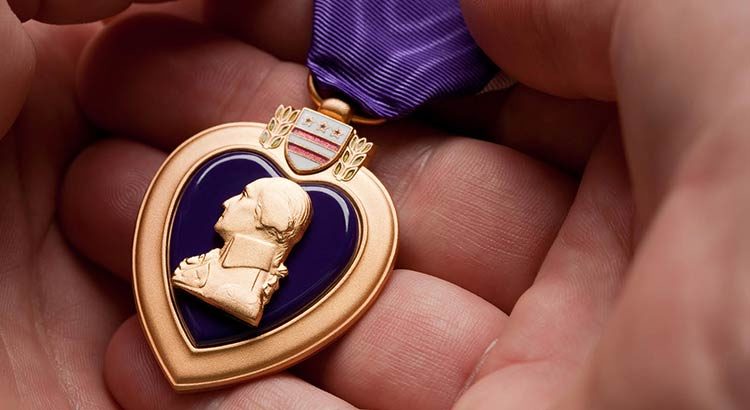 A wound is something a soldier carries with them forever. It’s a mark made indefinitely on their memory as well as their own body. It’s a constant reminder of their sacrifices as well as the unique situations they experienced in combat.

With the wounds of war being so impactful it’s no wonder that the Purple Heart would be America’s oldest official military medal. The award recognizes the sacrifice that a servicemember can make while in service.

In this blog, we’ll follow the history of the Purple Heart. From its conception in Revolutionary War America all the way to the current day.

The Revolutionary Origins of the Purple Heart 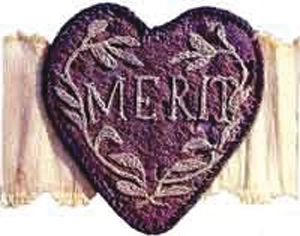 Perhaps to no one’s surprise the Purple Heart, as we now know it, originated from the mind of the Father of America, George Washington. The award was originally called the Military Badge of Merit. While the name was different, the basic style remains the same. It was made out of a piece of purple cloth, cut in the shape of a heart, and intended to be worn over the left breast.

It was one of the few awards that could be bestowed on common soldiers. Washington was driven to create an award honoring his enlisted men’s valor and meritorious service. This Badge of Merit was originally conferred on three sergeants; Sergeant Elijah Churchill, 2nd Continental Dragoons; Sergeant William Brown, 5th Connecticut Continental Line Infantry and Sergeant Daniel Bissel, 2nd Connecticut Continental Line Infantry. Of those three original Badges of Merit, two of them still exist.

Lost for a Century

Then, something extraordinary occurs in the award’s history. It simply vanishes. The Badge of Merit, or any equivalent, completely disappeared for nearly 150 years. In spite of the War of 1812, countless regional conflicts, and the Civil War, which spawned the creation of countless commendations including Memorial Day, the Badge of Merit is completely absent from the 1800s. As of the start of World War 1, the only indication that a serviceman had been injured was a nondescript award being placed over the wound. This system of sleeve chevrons was appropriately named the “wound chevrons.” Following World War 1 the Army Chief-of-Staff, General Charles Summerall, along with General John J “Blackjack” Pershing submitted a proposal to Congress for an official commendation more befitting of those who shed blood in battle. But the bill died in committee in 1928. Then, in 1932, the bicentennial year of George Washington’s birthday and 150 years after the Badge of Merit was originally conceived, the Purple Heart was created in recognition of Washington’s ideals. The first Purple Hearts of the modern era were conferred at Temple Hill in New Windsor, New York. It was US Army Chief Douglas McArthur who declared the award to be given to all who show valorous service in their service to the US Army. At the ceremony he said,

“A wound, which necessitates treatment by a medical officer, and which is received in action with an enemy of the United States, or as a result of an act of such enemy, may…be construed as resulting from a singularly meritorious act of essential service.” 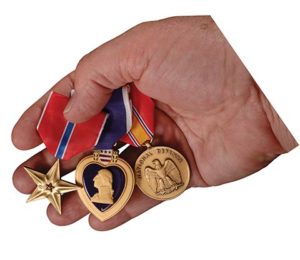 Following its creation, former servicemen were encouraged to write-in and apply for their own Purple Hearts. By 1940 more than 78,000 Hearts had been awarded to Civil War and World War 1 servicemen.

WWII saw a number of changes to the award. In 1942, FDR signed an executive order which empowered the Navy to award the Purple Heart to Marines, Coast Guard personnel, and Sailors who were either wounded or killed in action. This was retroactive to December 7, 1941 meaning all at Pearl Harbor, and in service since, were eligible. Women were also now eligible for the honor. By war’s end, over 1 million Purple Hearts were presented to men and women wounded or killed in action.

In the fall of 1952 Executive Order 10409 was signed which expanded those eligible for the award. Now, posthumous Hearts could be awarded to Navy, Coast Guard or Marine Corps personnel killed on or after April 5, 1917. This eligibility did not include Army or Air Force personnel until 1962 when Executive Order 11016 authorized Army, Air Force and even civilian Purple Hearts for those under competent military authority.

The new millennium saw even more expansion. In October of 2008 the Department of Defense authorized the Purple Heart for POWs who subsequently die in captivity after December 7, 1941. And 2015 saw the award become eligible to those wounded or killed by specific domestic terrorist activities.

Fascinating Facts About the Purple Heart

With the ability to award the Purple Heart to lower-ranking soldiers and non-commissioned officers the Purple Heart truly is a medal by the people, of the people. It’s an honor that soldiers of all ranks and eras wear with pride and distinction. And one which their families and descendants have proudly displayed down through the years.

Instituted in 1932, the Purple Heart is retroactive to April 5th 1917; however, exceptions for qualifying awards prior to that date have been made. Awarded to any member of the Armed Forces of the United States or to any civilian national of the United States who, while serving under competent authority in any capacity with one of the U.S. Armed Forces, since April 5th 1917 has been wounded, killed, or who has died or may die of wounds received from an opposing enemy force while in armed combat or as a result of an act of international terrorism or being a Prisoner of War.

Although the Purple Heart Medal was awarded for meritorious service between 1932 and 1943, the primary purpose of the award has always been to recognize those who received wounds while in the service of the United States military. Later, Presidential Executive Orders extended eligibility for the Purple Heart Medal to military and civilian personnel who received wounds from a terrorist attack or while performing peacekeeping duties.

Currently, the Purple Heart is awarded for injuries received while serving in any capacity with one of the U.S. Armed Forces. It may be awarded to civilians as well as military personnel. The wounds may have been received while in combat against an enemy, while a member of a peacekeeping force, while a Prisoner of War, as a result of a terrorist attack or as a result of a friendly fire incident in hostile territory.

About Medals of America