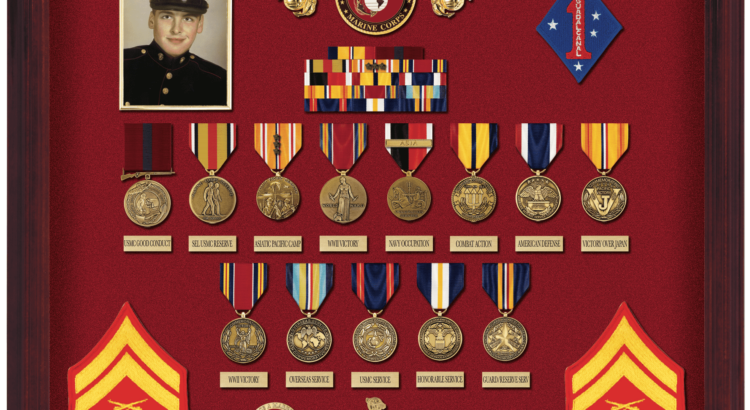 Sadly, we’ve come to a time in our history when most of what we have of the Greatest Generation are stories and memories rather than people. So many of them served our country during World War II and became heroes who deserve to be remembered.

One of the best ways to do that is with a custom shadow box that displays not only all of the achievements and honors earned by your loved one who served in World War II, but also other personal effects and images that can help preserve their story and share it with future generations of your family.

If you know someone whose parent or grandparent served in World War 2, then a custom shadow box displaying their World War 2 Army ribbons, medals, dog tags, and more items can be a fantastic gift for them.

Building a shadow box isn’t overly complicated, but it can be a bit overwhelming if you don’t know where to begin. To help you do that, consider these WW 2 shadow box ideas that may lend you some inspiration.

You may never have heard of a shadow box. Shadow boxes are essentially picture frames that allow you to display a variety of items due to their added depth.

The possibilities with shadow boxes are almost endless if you’ve got some creativity and a great story to tell, and there are even more options open to you if you’re handy enough to build one from scratch.

Building your World War 2 shadow box from scratch means you can make a display with dimensions that are suited to the items you want to place in it, rather than the other way around. This handmade item offers a beautiful way to remember World War 2 veterans and an amazing gift for anyone with a loved one who served.

There are many guides online to help a World War II shadow box builder out, but if you’ve got some basic ideas of what you want to include we can help with the rest!

What to Include in the WWII Shadow Box

There are many different things you might want to include in a World War 2 shadow box.

You’ll first need to know a few things about the veteran you’re looking to honor, such as:

If the veteran happened to keep all of their medals, ribbons, and other items from their time in the service, and you have access to them, that will make things much easier.

If you don’t, you can still reach out to the branch they served in and request a copy of their official records. You may want to do this even if you do have access to their World War Two medals and ribbons, as the collection may be incomplete.

Medals and ribbons are excellent additions to your World War 2 shadow box. They are symbols of the sacrifice that all of the brave men and women who served in the deadliest war of all time made, and of the honors bestowed upon them for it.

If you have some basic information about the veteran you’re looking to honor, you should be able to determine which World War 2 medals and ribbons to include.

Every person who served in the armed forces between December 7, 1941, and December 31, 1946, earned a World War 2 Victory Medal. It’s an essential element of any World War 2 shadow box.

Anyone who served in the Pacific theater for 30 days or more earned an Asiatic Pacific Campaign Medal. There are 21 Army campaigns and 28 Navy campaigns that earned this medal.

The Europe-Africa-Middle East Medal was awarded to anyone who served either 30 consecutive or 60 non-consecutive days in a variety of campaigns throughout Europe, Africa, and the Middle East.

World War Two campaign ribbons are another vital item to include in your shadow box. Ribbons represent a variety of different things, from the number of campaigns the veteran served to awards they earned to any foreign honors they received.

Note: a lot of veterans only received the ribbon versions of their medals because of the metal shortages during those times.

The veteran you’re looking to honor will also have badges and insignia that you’ll want to include. There are badges that identify rank, job, and assignment, as well as badges that denote skill and achievement, such as marksmanship badges.

Most people don’t know that if you were in the Army during WWII and received a Combat Infantry Badge (CIB), you are also entitled to the Bronze Star Medal (BSM).

Insignia are also identifiers for service members. They indicate status, qualifications, and other identifiers. For instance, if the service member was a pilot, that would be displayed via a pilot insignia.

Other Items of Interest

You’ll also want to include some personal effects that help tell the story of the veteran themselves. Photographs, handwritten letters, dog tags, and other items can all enhance your custom shadow box and make it something special.

If you’d like to see more about military awards and gift ideas for those with loved ones who served in the military, sign up for emails from Medals of America today.

If you are ready to start building your WWII shadow box get started. You can contact a Military Awards Specialist at Medals of America, and they can walk you through the whole process. Call 1-864-862-6425.