The Bronze Star Medal, or BSM, dates back to World War II. Today, it is the fourth-highest ranking award a service member can receive for a heroic and meritorious deed performed in an armed conflict. For those who receive the BSM, it is a signal of their sacrifice, bravery and honor while serving their country.

What Is the Bronze Star?

The Bronze Star became part of the military award catalog in 1944. Colonel Russell Potter Reeder came up with the idea for the medal after an injury in Normandy, which medically retired him from the Army.

While he received the Purple Heart, Distinguished Service Cross and Silver Star after he returned home from battle, he wanted commanders in the field to have a way to award ground soldiers immediately–especially those who had been in the line of duty for an extended period.

Colonel Reeder initially called his idea the “Ground Medal,” and his proposal quickly moved up the channels until it reached President Franklin D. Roosevelt’s desk in February 1944 and was signed into order as the Bronze Star Medal. It established a retroactive precedent for service members dating back to the start of America’s participation in World War II at the attack on Pearl Harbor.

In 1947, the Bronze Star retroactively replaced the Combat Medical Badge and the Combat Infantryman Badge during World War II.

What Is the Bronze Star Awarded for?

The Bronze Star Medal recognizes service members who show acts of heroism in the field, or who are meritorious in their work. To qualify, service members must perform these acts during an armed conflict against an enemy of the United States. Meritorious or heroic acts during aerial flight are disqualified from this award. The medal is awarded in three categories: valor, merit and achievement.

What Does the Bronze Star on a Ribbon Mean?

The Bronze Star is a 1½-inch diameter star made of bronze and it hangs from a red ribbon with a vertical blue stripe surrounded by thin vertical white stripes. On the reverse of the star is the inscription, “HEROIC OR MERITORIOUS ACHIEVEMENT,” along with the recipient’s name. Like the colors of the American flag, the colors of the Bronze Star ribbon (or drapery) represent the values of purity, perseverance and bravery. 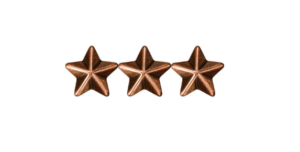 What Are the Devices of a Bronze Star Medal?

Bronze Stars are sometimes awarded with a “V” device, which means that the meritorious or heroic acts were performed during actual combat. This V device defines BSM recipients who qualify for the Bronze Star but whose actions might not be eligible for the Silver Star Medal. It gives an extra bit of recognition to BSM recipients and sets them apart from other BSM beneficiaries.

There are star devices that denote the number of conflicts the recipient participated in and received awards in. They can also signify additional achievements. For other acknowledgments, star devices can be mounted on a ribbon bar or the medal ribbon itself. These devices include:

How Common Is the Bronze Star?

The Bronze Star requires a commander to recommend the service member to receive the medal, along with a citation in their orders. Bronze Stars were awarded to well known veterans such as news personality Andy Rooney, Senator John McCain and writer and columnist James Brady. A civilian photographer named Joe Galloway received the medal during the Vietnam War for rescuing a wounded soldier in 1965. Author Ernest Hemingway also received the award in 1947 as a writer who worked closely with troops from Normandy to the Battle of the Bulge.

The Bronze Star was awarded in the following conflicts:

Only one in 40 recipients qualify for the Bronze Star with the V device.

How Do You Earn a Bronze Star?

To earn a Bronze Star, you have to perform an action that shows bravery and courage. Even civilians can earn the badge if they act like a service member and fight the enemy or save a wounded soldier.

It can also be awarded for those who perform their duties well in a combat zone, even if they never enter the actual field of battle.

If you have a Bronze Star Medal or other awards, a military medal display rack or shadow box is the perfect place to keep them safe and visible in your home. At Medals of America, we honor our nation’s veterans with a large selection of medals and ribbons. To learn more about our products, explore our website or call us at 1-800-308-0849.