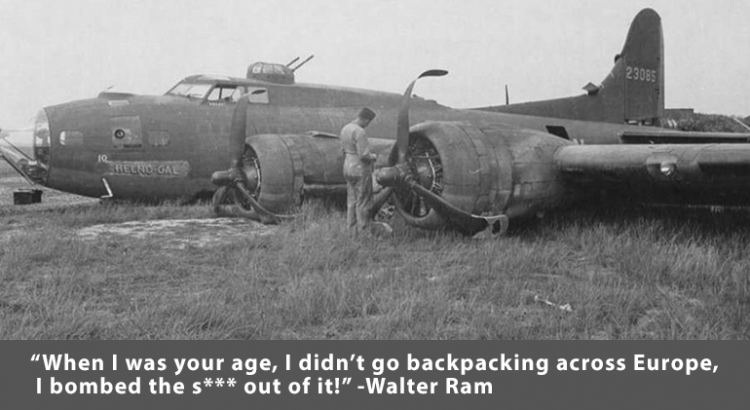 Medals of America was founded on the principle of celebrating, honoring, and paying our respects to our American heroes: U.S. Military veterans. These values have shaped our company and has brought us some of the best customers we could ever ask for.

Our shadow boxes, the cornerstone and foundation of MOA, hold such great significance to us and the customers we serve. Each box, adorned with medals, ribbons, patches, and pictures, tell a story not many people experience. Stories of sacrifice and courage beyond compare, memories and the celebration of excellence.

This is the story of Mr. Walter Ram, a WWII combat veteran and P.O.W. Survivor of Stalag 17B, one of the notorious German POW camps during WWII. We are so fortunate and thankful to be able to serve Mr. Ram and help him and his son create a masterpiece that tells his seemingly impossible story of determination, will, and survival.

During Ram’s one year in the Infantry, he was transferred from Fort Sill to several other U.S. bases for training. After Ram was Honorably Discharged he returned to high school to get his diploma. But when WWII started, only two months later, Ram left high school to join the Army Air Corps in hopes of becoming a pilot. Since he left school before graduating, he was unable to become a pilot, and instead was trained as a radioman and gunner.

On July 16, 1942 Private (PVT) Ram graduated from the Arm Air Forces Technical School and Scott Field, Illinois and earned his diploma for completing his course for Radio Operators and Mechanics. In the same year, on August 19 Staff Sergeant (SSgt) Ram graduated from the Aerial Gunners Course and was immediately promoted to a Tech Sergeant (TSgt).

During WWI and WWII it was often common for servicemembers to paint and decorate their planes, and the Helno-Gal is no exception. The co-pilot of the plane wanted to name it “Corky”, but everyone else had different plans and said “Hell no!” and thus, Helno-Gal was born. Helno-Gal was hit by German fighters on Ram’s third mission in England. Fortunately, the full crew survived. 23 days later on his sixth mission his B-17F was shot and exploded over Kiel, Germany, which is in northern Germany on the shore of the Baltic Sea.

Four of 10 crewmembers survived, including Walter Ram. Ram’s crewmember, Chuck Lewis, threw Ram out of the plane, ultimately saving his life; Lewis did not survive the crash. Ram parachuted to safety but was ultimately captured by the Germans and sent to the infamous Stalag 17B, formally Stalag XVII-B, near Krems, Austria.