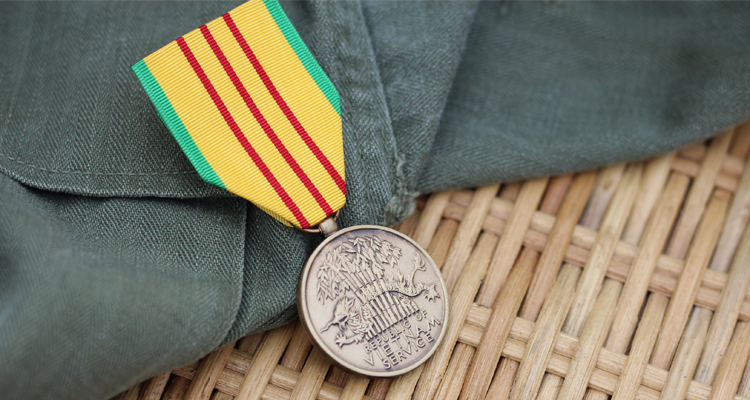 The quote “All gave some, some gave all” rings true for veterans of all wars, especially for Vietnam vets because of how divisive and controversial the war was. The quote has become synonymous with the Vietnam War because of the devastation the war caused home and abroad.

Medals awarded and earned have always had emotional attachment and deep meaning. They represent hard work, commitment, tough decisions, bravery, and fearlessness. War medals carry stories and a history that is unique in the best or worst way possible.

Vietnam medals especially have a deeper meaning to them because of the unpopularity of the war, how it divided the country, and the draft that went along with it. The Vietnam war is more than a conflict, like any war, it tore families apart, took fathers away from their wives and children, and many still suffer invisible wounds and health issues.

Many Veterans that came home rarely talked about the war because it is a painful experience to relive. The medals told stories that they couldn’t. The design of the medal conveys the experience through imagery on the medalion and the color of the ribbon the medal hangs from.

The drapery the medals hang from tells a story about the conflict. For example, the Armed Forces Expeditionary Medal has the U.S.’s national colors in the center, light blue sections on either side to represent water or overseas service, and the colors on the outward edge of the ribbon represent areas of the world American troops may go for service.

Show Off Your Vietnam War Medals

Every troop’s experience in Vietnam was different, but the medals they were awarded are the same as their fellow soldiers?. There are two medals that are commonly awarded for service in the Vietnam War: the Vietnam Service Medal and the Republic of Vietnam Campaign medal.

The Vietnam Service Medal is a U.S. medal introduced during the War. It was authorized by an executive order in 1965. The Republic of Vietnam Campaign medal is what is known as a foreign award, a military decoration or medal that is awarded to American troops who aided that country in a conflict. These two medals are almost always simultaneously awarded alongside the National Defense medal.

The Vietnam Service Medal was awarded to any servicemen and women that served in Vietnam, Laos, Cambodia and/or Thailand from 1965 to 1973 for 30 consecutive or 60 nonconsecutive days.

The colors of the ribbon represent:

Bronze stars are mounted on the ribbon for participation in the below campaigns:

Army and Naval service in:

The devices earned from these conflicts, battles, and missions and are earned for dedication, bravery, and hard work. On paper they are just parts of history and a timeline about the war, but for the veteran who lived through it, it’s much more. It’s a memory that will never be forgotten.

The Republic of Vietnam Campaign medal was introduced during the First Indochina war and the Second Indochina War, the Vietnam War. It is a foreign medal created by the Vietnamese government that was authorized for wear on American troops as of December 1966 for their service in Vietnam.

The medal’s design is an important part of telling the story of the Vietnam War:

This medal is different because it comes with a default device: the “1960-” bar attachment. The 1960 device, as it’s known, reads the start date of the conflict and the open space after the dash was to include the end date of the Vietnam War, but because they were produced and awarded during the war no end date was added.

To receive this medal the service man or woman must have:

Many medals were awarded to soldiers, Marines, sailors, and airmen posthumously and were delivered to their next of kin. To the spouses and children of a fallen troops the Vietnam war medals hold even more meaning because the loss of a family member, father, and husband. Having their Vietnam war medals was something to remember them by and to cherish forever.

Our selection of medals encompasses all Vietnam War medals including foreign awards like the Civic Action Medal First and Second Class, the RVN Wound Medal, and plenty of Vietnam-specific commemorative medals to honor your service including a 50th Anniversary medal, defense medals, and an Honorable Discharge Commemorative medal.