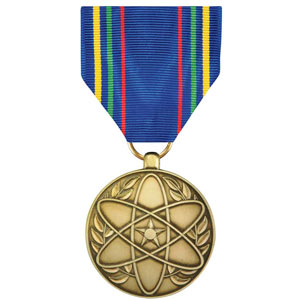 Authorized by the Secretary of the Air Force May 27, 2014, this military medal is awarded to individuals for their direct support of nuclear deterrence operations.

“This service medal provides a clearly visible way to recognize the dedication and professionalism of our Airmen who are the guardians of our nation’s nuclear deterrence. Because of our success, often times nuclear deterrence operations can be overlooked as a critical function,” said Col. Zannis Pappas, the missile operations career field manager. “The medal acknowledges the special challenges faced by those Airmen charged with supporting the nuclear enterprise and will be a point of pride by all who wear it.”

The NDOSM may be awarded to Airmen who while as- signed, attached, deployed or mobilized to a unit, provided support the Nuclear Enterprise for 120 consecutive or 179 non-consecutive days and were subject to a nuclear inspection or performed duties in nuclear operations to include nuclear weapon storage facilities; nuclear command, control and communication; cyber surety; security; safety; transportation; maintenance; facility management and maintenance; explosive ordnance disposal; aircrew certified for support to nuclear operations; weapons loaders; warning and attack assessment; personnel reliability program management; or research, development and acquisition of nuclear systems.

The medal will be worn with an “N” device for those who dispatched to a missile complex for 179 nonconsecutive days in direct support of intercontinental ballistic missile operations or are in direct support of nuclear laden aircraft. Only one “N” device will be worn, regardless of the number of qualifying assignments. An oak leaf cluster will be worn for subsequent awards, which will only be authorized when a PCS has occurred.

Eligibility for the medal is retroactive to Dec. 27, 1991. A member’s current group commander is considered the awarding authority for the medal. Retired or separated Air- men can submit a request to the Air Force Personnel Center recognition section for validation. The award can be presented posthumously, as well, so family members of deceased Airmen can also contact AFPC for information.

The the front of the NDOSM has a laurel wreath surmounted by a nuclear symbol with a star bearing a disc in the center. The reverse has a circular inscription, “NU- CLEAR DETERRENCE OPERATIONS SERVICE,” a triangle between the first and last words, the U.S. Air Force “Hap Arnold” symbol and between its wings, the inscription “U.S. AIR FORCE.”