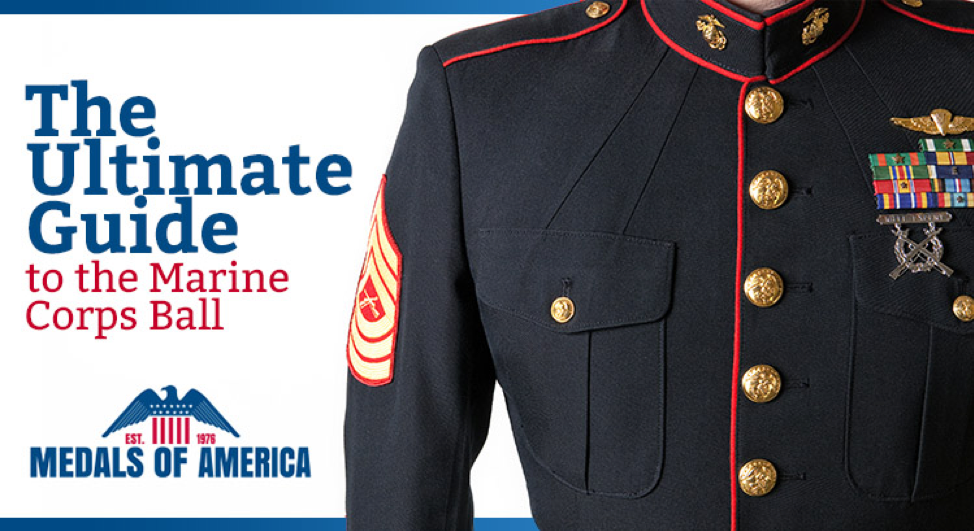 The Marine Corps Ball is an annual event to honor the Marine Corps, it’s founding, members, and accomplishments and has been celebrated throughout the history of the Corps.

So you’ve been invited to the Marine Corps Ball. First off, congratulations! The event is a “pretty huge deal,” so get ready. You’re in for a night full of tradition, celebration, remembrance, dancing, and at least two drinks. The dress code is dapper and the food will be amazing.

Let’s go over everything you need to know about the Ball: where it is, who you can bring, what to wear, what your date needs to wear, all the traditions and what you should bring. This is likely going to be one of your best nights of the year, so get those Marine medals and Marine ribbons updated and prepare for a great time.

What is the Marine Corps Ball? 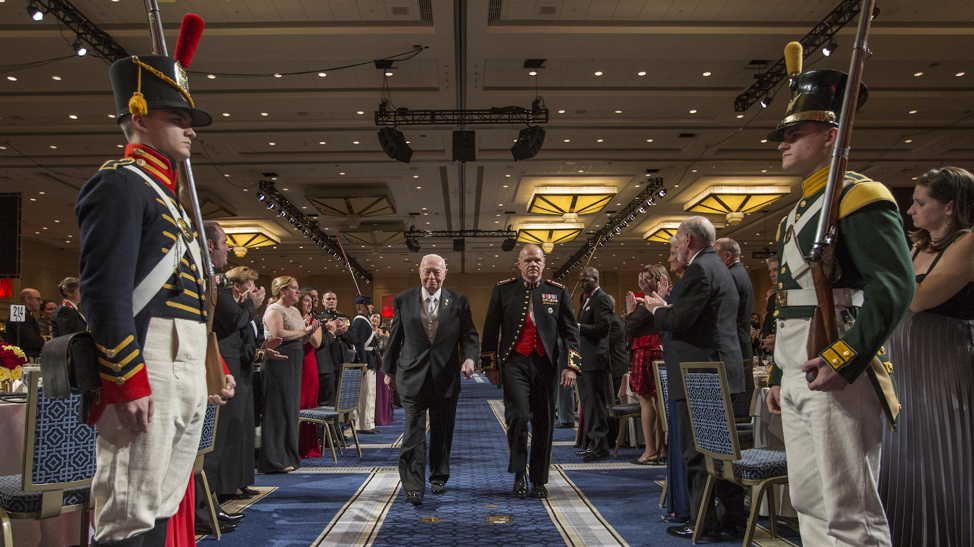 The Marine Corps Ball is an annual celebration that commemorates the founding of the Marine Corps on November 10, 1775. This is a tradition dating back to before the Declaration of Independence and celebrates the many sacrifices made by Marines to protect that Declaration and this country–from 1775 to this present day. General John A. LeJeune, the 13th Commandant, wrote the first Marine Corps birthday message which is read at the Ball.

Where is the Marine Corps Ball?

This year, the main Marine Corps Ball, mainly known as the Commandant’s Ball, will be held in Washington, D.C. at the Washington Hilton on November 9.

Marine bases, including international bases, and Embassies also host Ball celebrations. While they’re smaller events, these have the benefit of not being in Washington, D.C., which probably means less traffic and an easier ride back to your bed at the end of the night. These international celebrations allow civilians such as state department employees to partake in the festivities and learn about Marine Corps traditions.

Who can I Bring?

After all, what’s the point of a ball if you aren’t allowed to bring a date? Your significant other is the default answer to this question, and they should–clearly–consider themselves lucky. However, if you’re #SingleForLife, welcome to the club. Invite pretty much anyone: your best bud, your high school crush (some dreams never die) or your Uber driver, but trust when we say to avoid:

If you’re a female Marine, there is no shame in bringing your significant other–even if he hasn’t served–just so long as he’s aware of the incredibly lucky man he is. There will, however, be a lot of masculinity in the room, so he will have to behave accordingly. 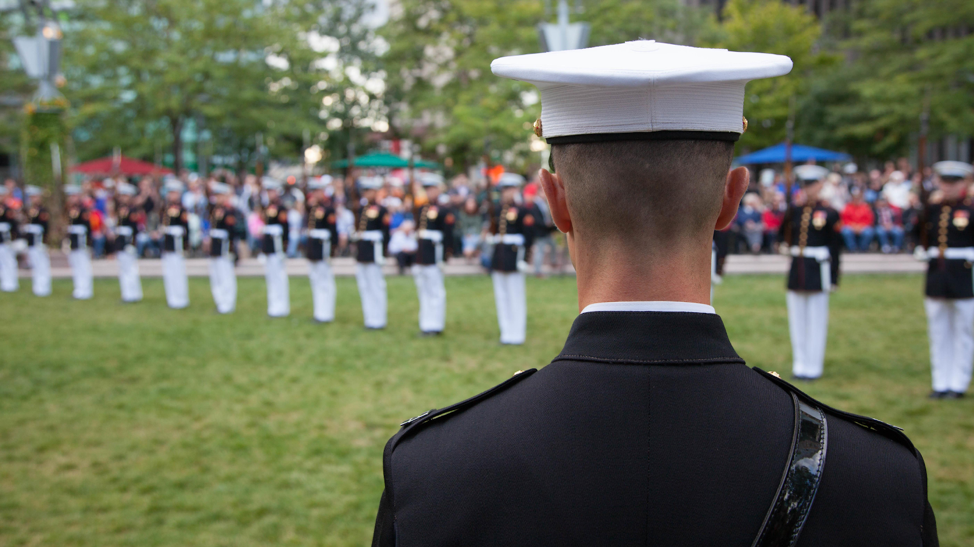 What your Date Needs to Wear

First things first: This is a black-tie event. Be fancy, formal and celebratory. Think classy, not trashy. You will be in the company of some high-ranking guests of honor, whether it is the Secretary of the Navy, the Commandant General or an Ambassador, dress appropriately for the occasion.

If your date is a civilian, they need to wear black-tie attire. This means no short dresses, no glitter unicorns, no Hawaiian-print shirts, no crazy slits up the thigh, nothing that will rip if you dance or cough the wrong way and no excessive cleavage. Ladies, choose a floor-length gown that will be practical and classy all night long. Gentlemen, rent or buy a tuxedo, and remember to book ahead of time to make sure you get one in your size. This is the Marine Corps Ball, after all, not a semi-formal with your fraternity brothers.

If your date also serves in the military, each branch obviously has its own formal dress code. Here’s a link with more information about the dress code, just in case your partner is the kind of person who needs some wardrobe assistance (we get it). In general, remind your date to think classy, put-together, and comfortable. Avoid teetering high heels and anything ill-fitting or too tight and you’ll be ready for a glorious night.

What YOU Need to Wear

This is a formal Marine Corps event, so there isn’t too much room to maneuver here. Let’s go into the details.

As for the dress code, you will either be in Blue Dress “A” or Evening Dress “B.” Just in case this is a lot to remember, here’s a checklist.

Prepare your Marine medals, ribbons and badges at least three weeks ahead of time. This is the night to celebrate your accomplishments, as well as the legacy of the Marine Corps as a whole.

Remember: This is a Night Full of Tradition

You’re partaking in a branch of the U.S. military  that is over 200 years old and a Ball tradition dating back to 1925. The Marine Corps is turning 244, the party’s 94 years old, and the night will live on forever in the memories you possess at the end of it and you can expect some good times. There will be some somber, more serious moments, as well as plenty of fun.

Just remember that this isn’t high school and you are a Marine or a Marine’s date. Know your limits, respect everyone else present and have a good time. You don’t want to forget the entirety of a good party or, on the other hand, to make memories in everyone else’s minds for the wrong reasons.

The first official Marine Corps Ball back in ’25 took place in Philadelphia, the site of the Marine Corps founding. Since then, it’s moved locations and we’ve fortunately moved on from tricorn hats, breeches and rickety muskets. Regardless, the ethos of the night remains unchanged. Here are some of the traditions you can look forward to:

The Guard will raise the colors and play the National Anthem to start the night off right. Usually, a guest of honor or multiple guests of honor will speak and the ball coordinators might have planned a Marine Corps birthday video.

The oldest and youngest Marines present will be given the honor of cutting the cake, most likely with a sword. Everyone will get a slice and I promise it will be excellent.

Next, you will most likely hear a reading from the scroll. This is where you’ll hear Gen. John A. Lejeune’s birthday message from 1921. In case you’re curious, here is some of it:

This will almost certainly be the most emotional moment of the night. Speeches might be made to commemorate the fallen, and there will certainly be a moment of silence and an empty space set aside to honor the dead who gave their lives in sacrifice for the Marine Corps and the United States.

Each base or ball will likely have its traditions as well, so check in with people who’ve been before to get the inside information. Get your medals ready, polish up and enjoy the tradition and the ceremony. 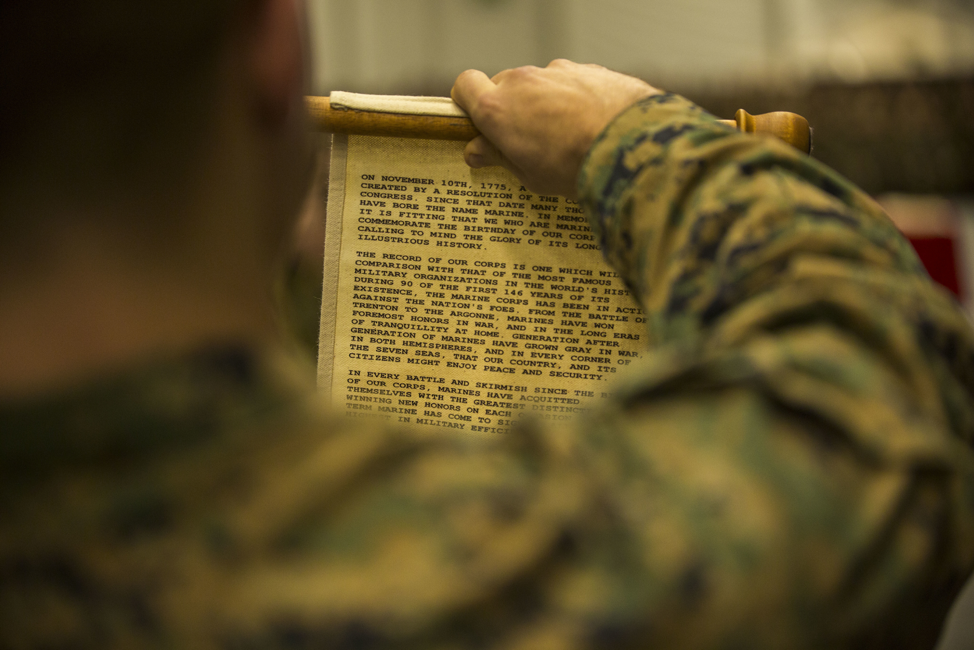 Now that you’re as ready as you can be for the formality, tradition, celebration, camaraderie and emotion of this yearly night, let’s look at the last of the practical stuff.

First, bring some cash for the cash bar. It’s a good idea to bring just enough so you can buy your companions a few drinks, enjoy a few yourself and generously tip the bartender, but not so much you’re tempted to get trashed on whiskey and Cokes. Again, this isn’t a college party and there will be plenty that happens that will be well worth remembering. Don’t be that person.

Women: Remember to bring a small bag to the event. Something that’s just big enough to hold your phone, keys if you drove, cash and travel-size makeup for touch-ups is more than plenty. You don’t want your bag taking up an extra seat.

Everyone: Remember to bring your cell phone but don’t spend all night on it. Take a few group selfies to show your mom and grandmother how wonderful it is to be a Marine and leave it at that. Remember to keep it charged so you can call an Uber to take you back to your hotel if need be. Don’t drink and drive. If you’re staying until the party ends, then save your future self a step and book an Uber beforehand.

Remember to Have Fun!

This is set to be one of the best nights of the year, and it’s here to honor your role or your significant other’s role in serving the United States of America. Take the evening to step back from everyday concerns and bask in good food, illustrious tradition and the camaraderie of friends. Thank you for your sacrifice and have an incredible night.