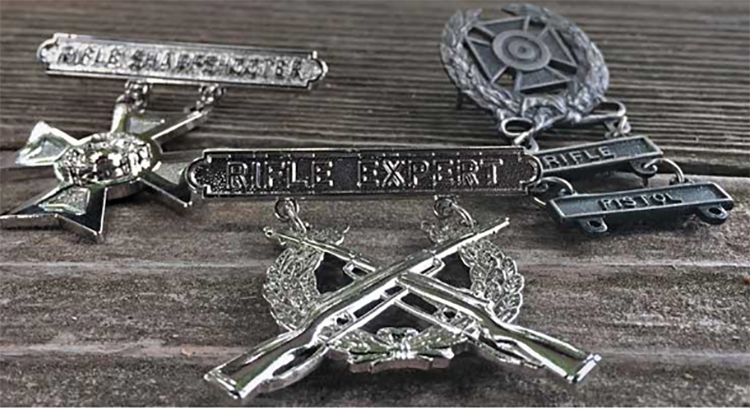 Currently, the Army and Marines are the only two branches of the military which issue a marksman badge. There are several categories of achievement in these qualification categories, and they are a source of pride and honor for those who are skilled and talented in the art and science of shooting.

The marksman badge is required by both the Army and Marines in order to graduate from basic training. Recruits train for several weeks by shooting at multiple stationary and pop-up targets from a variety of positions and angles, all while using their environment to cover their position.

It is essential to achieve proficiency in marksmanship to graduate from Army boot camp. You must be able to position yourself, point and shoot at a target when you are a soldier, and so the marksman weapons qualifications badge shows you have achieved this feat.

The award is given in three levels for enlisted service members: Marksman, Sharpshooter and Expert. The award is further broken down into proficiency of the weapon you are using. The standard test is performed with the service-issue M-4 Carbine. It can also be earned in other weapons categories, including the pistol, machine gun, field artillery, missile and mortar weapons.

It takes two to three weeks of training before you take your marksmanship qualification test. New changes made to the test in 2019 incorporate a new way of engaging targets that more closely mimics actual wartime movements. The new test takes about four minutes to complete. The test requires you to aim and shoot multiple engaged targets (both stationary and pop-up) from four firing positions: Kneeling Supported, Unsupported Prone, Supported Prone, and Unsupported Standing.

In the test, you will pass and earn a marksman badge if you hit at least 23 out of 40 targets on the course.

The marksman badge is not a permanently earned badge. You must re-test and qualify for your marksman qualification badge every 12 months, and you must wear the badge you have earned during your most recent test.

Much like the Army, the Marine Corps requires recruits to graduate from basic training with a marksmanship qualification badge using their service-issue M-16 rifle which they carry and train with throughout the duration of boot camp. Those qualifying to become officers and going into certain specialties will also need to pass a qualification test using their Glock 19M.

There are three levels of achievement for the marksman badge: Marksman, Sharpshooter and Expert.

Like the Army, the Marine Corps is also revamping their marksmanship qualification test to reflect the evolving real-life battle engagement scenarios soldiers may face in combat. The test takes place over two days and involves four tables of drills which the Marines must pass to qualify. Recruits must qualify consistently over the course of more than one day, so if they fail one table, they must retake the test later on in their training.

The test not only requires recruits to engage with different targets, but they also must distinguish whether those targets are friendly or hostile before firing. Marines must begin in a standing position and drop to a kneeling or prone position, or forward movement when they engage their targets. Marines will cycle through four positions: Prone, Standing, Kneeling and Sitting positions.