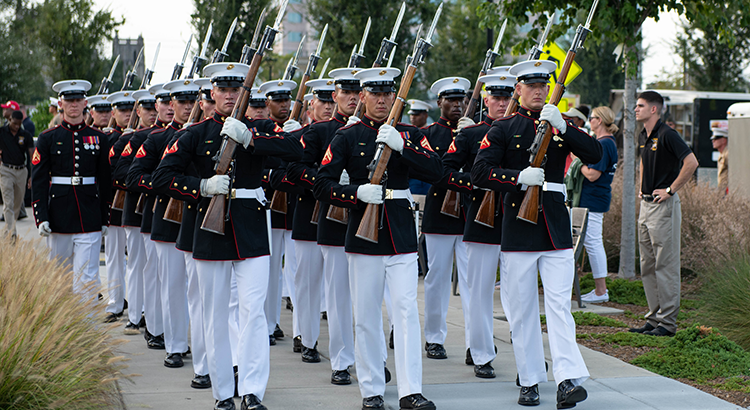 The United States Marine Corps has one of the most identifiable uniforms out of all the branches of the U.S. military. This is due in part to the fact that the outfit has not changed much over the past 100 years. There are four principal livery ensembles to consider, and as with other military uniforms, every detail has meaning. Let’s take a look at the variations of the Marine Corps uniform. 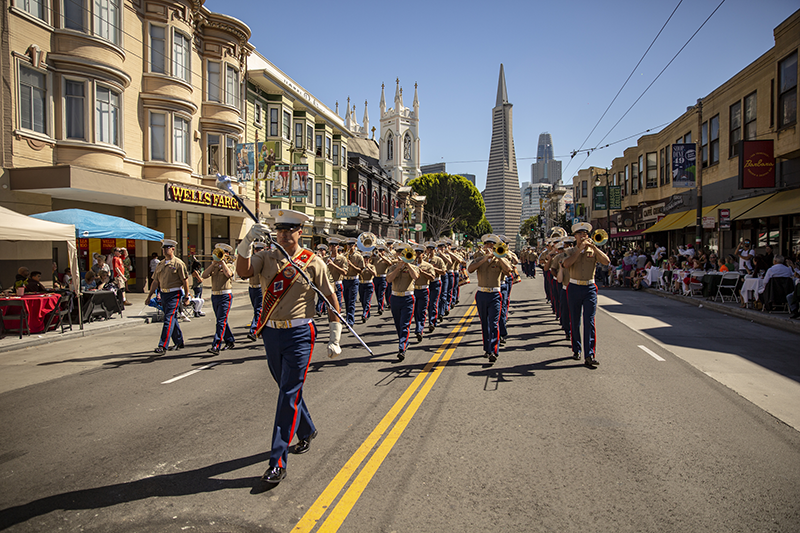 The Dress Uniform is the Marine outfit for ceremonial occasions and is the most elaborate. It has been in use, with minimal changes, since the late 19th Century. It is the most recognizable of the Marine uniforms and officially called “Blue Dress Uniform” because of the formal blue coat. It’s more commonly referred to as “‘Dress Blues” or only “Blues” by the Marines who wear it. It is the only military uniform, of any branch, to incorporate all three colors of the American flag.

There are four official versions of the formal Dress Blues. They are given proper military delineation and known as Alphas, Bravos, Charlies and Deltas.

The most common is the Alpha version and an equivalent to black-tie. It constitutes a long-sleeved navy jacket with standing collar over a plain white shirt and white, webbed belt on top. Enlisted soldiers will have red trim on the coat and a gold waist plate corresponding to rank. Officers will have a gold M-buckle on their jacket belt.

Pants are sky blue in color for enlisted Marines and midnight blue for officers. The red stripe down the trousers, also known as a “blood stripe,” varies in width depending on rank.

Men wear black socks with shiny dress shoes. Women wear black pumps and may wear a skirt instead of trousers.

The Bravo uniform is the same, except Marine ribbons take the place of their corresponding Marine medals and all of the Marine ribbons are worn on the left side of the chest.

Versions Charlie and Delta are rarely worn because they are more casual and are made for Marine security guards and recruiters to wear in warm weather. Marine One pilots, those who are flying the President of the United States, may also wear these versions in place of a flight suit.

The Alpha Dress Blues are not permitted for wear while on leave, but the other versions are allowed for liberty wear.

The Blue-White is a summer variation of the Dress Blues. There is an Alpha and Bravo version, and they are the same as the Dress Blues except that the skirt or trousers are white and do not have the red stripes down the leg.

The evening dress version is equivalent to white-tie and only applies to specific officers. It is the most elaborate of all the uniforms, with sleeve ornamentation, extra stripes on the collar and legs and red waistcoats or cummerbunds. The cut and style of the evening dress are more formal as well. This uniform is reserved for inaugural dinners and state functions.

While Dress Blues are akin to black-tie, the Marine service uniform is more like a business suit. And like the Dress Blues, there are several variations on the main khaki and green ensemble.

The Alpha uniform consists of green pants with a khaki long-sleeved button-up shirt under a green jacket, with a khaki web belt. Men wear it with a khaki tie, tie clasp and black dress shoes. Women can wear black pumps with a skirt instead of trousers, and instead of a tie, they wear a green neck tab. Marine badges and ribbons are worn on the left side of the jacket.

The Bravo uniform is the same but without a jacket. Marine ribbons are worn on the khaki shirt instead.

The final variation, Charlie, is the most casual with a short-sleeved shirt and no tie. 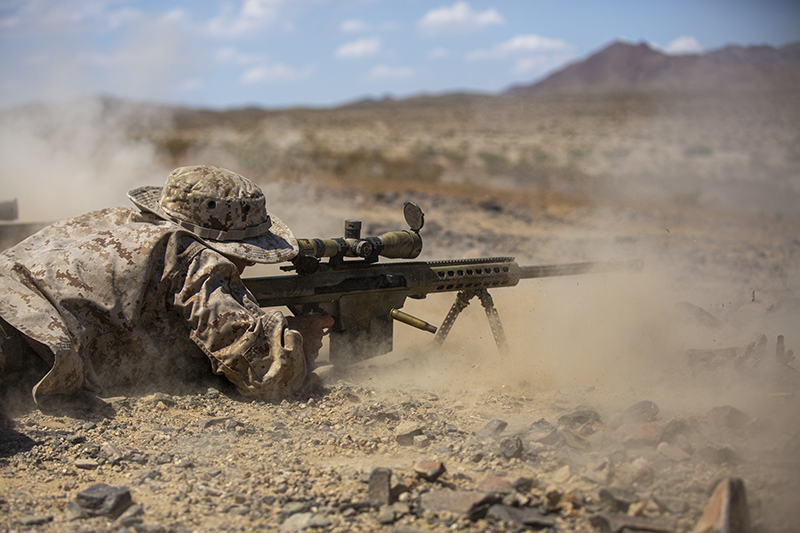 The utility uniform referred to as the MCCUU–which stands for Marine Corps Combat Utility Uniform–is a digitally printed camouflage outfit that comes in two distinct colorways. There is a desert or summer version made up of grey/tan/brown. There is also a forest or winter version made up of black/green/brown. These uniforms are worn actively in the field and deployed garrisons. The official Marine emblem of Eagle, Globe and Anchor appears in the camouflage design in both colorways.

The physical training uniform is entirely utilitarian and made for vigorous activity. It consists of nylon shorts, polyester t-shirt, sweatpants, sweatshirt tracksuit, watch cap and gloves, all in olive-drab green. The Marine logo is on the left thigh and left chest of the sweats in black ink. There are reflective emblems on the tracksuit as well, which is one of the newest additions to the Marine uniforms. It was introduced into service in 2007.

This breakdown of the various Marine Corps uniforms should provide you with a working knowledge of the different types of regalia and why they are worn.