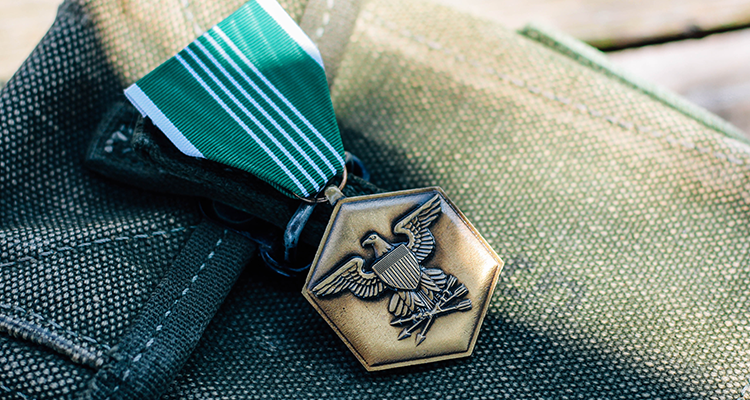 Army Commendation Medal, abbreviated and often called ‘ARCOM’, was instituted in 1945 and was awarded retroactively to those who served after December 6, 1941. The ARCOM is awarded to those who have served with the U.S. Army and have demonstrated heroism, meritorious achievement, or meritorious service. The Army Commendation Medal was one of the many military awards created right after World War II to decorate and honor the brave soldiers that served in one of the deadliest conflicts known to man.

The Army Commendation Medal is often awarded if the actions of the recipient do not meet the requirements of the Soldiers Medal or the Bronze Star.

History as a ribbon-only award

Retroactive awards of the Commendation Ribbon were authorized for any individuals who had received a Letter of Commendation from a Major General or higher before January 1, 19476.

Transition into a medal award

In 1949 the notion to change the Commendation Ribbon to a medal was approved to become a ribbon with a pendant.

It wasn’t until 1960 the Army Commendation award was completely redesigned to the medal we know today! But the changes didn’t stop there; in 1962 the authorization for the medal changed to allow members of the Armed Forces of a friendly nation for the same level of achievement or service which was mutually beneficial to that nation and the United States. Now it is a highly regarded U.S. Army award.

On February 29, 1964 the bronze “V” attachment was approved for the ARCOM. The bronze “V” device denotes acts of combat heroism that are to a lesser degree to be awarded the Bronze Star Medal.

The ribbon has a thin white stripe on each end and five thinner white stripes in the center. The rest of the ribbon is myrtle green, just like the Navy and Marine and Coast Guard Commendation Medals.

The back of the medallion reads “FOR MILITARY MERIT” with a space to have a name engraved.

If you, a family member, or a loved one has earned the Army Commendation Medal you can purchase the medal by itself, or get a mounted medal rack to showcase the military career you or your loved one has worked hard for.