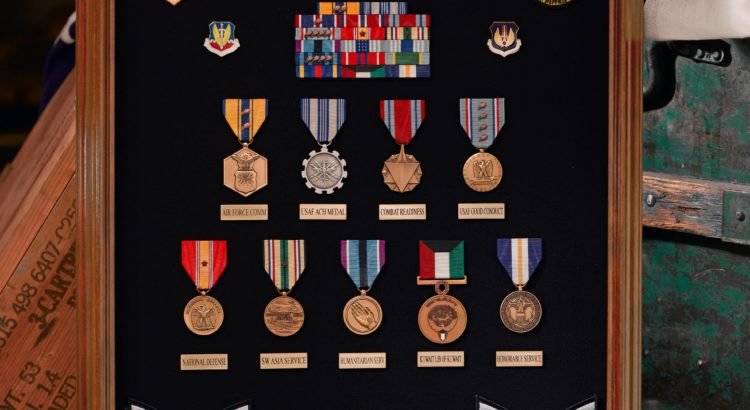 By the end of their military career, any Gulf War veteran will likely have amassed a collection of medals, ribbons, badges, and other items that stand as symbols of their dedication to their country and the sacrifices they made to protect it.

These amazing pieces of that veteran’s story sadly often wind up in boxes stuffed away in closets and not prominently displayed in a way that honors that story.

If there are any Gulf War veterans in your life and you’re looking for a way to display all of their awards and any other pieces of their story, a military shadow box is one of the best ways to do it.

These simple yet elegant display cases provide a beautiful space for medals, ribbons, photographs, dog tags, and other precious items to be safely collected and displayed in one place where they can be seen and appreciated.

However, knowing where to begin with your Gulf War shadow box is not always easy. Creating a display containing all the right items and perfectly honors your loved one requires careful consideration and attention to detail. To ensure that you do it just right, consider these Gulf War shadow box ideas: 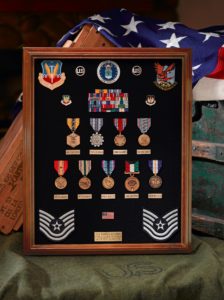 A shadow box is essentially a picture frame with more depth. Shadow boxes allow you to display photographs, keepsakes, mementos, heirlooms, and in the case of Gulf War veterans, various military ribbons and medals.

Choosing the right one will depend mostly on what you want to display in yours, so first, you’ll want to create an inventory of those items.

You may have to dig your footlocker out of the attic to get started but its a great place to begin. You might know where your loved one keeps their ribbons and medals, but that collection may be incomplete.

To know the full details of their service and what honors you may be missing, you can request a copy of their official records from the branch they served in. If you find that they’re missing certain medals, ribbons, badges, or rank insignia, you can order replacements from Medals of America.

Other Military Items to Consider

A great way to add some sentimental value and personal detail to your Gulf War shadow box is to include photographs, dog tags, and other personal effects that your loved one kept from their tour of duty.

While the medals and ribbons tell the story of their accomplishments, images and other items can tell an even bigger and more personal story. They can also open your mind to some creative shadow box ideas.

Once you’ve got everything you’d like to display together, you can get an idea of the size of shadow box you will need.

Medals of America offers shadow boxes designed specifically to display military honors, ranging in size from 5 x 7 in to 16 x 24 in. To get an idea of what size shadow box you might need, try laying your inventory out how you’d like to display it and taking rough measurements from that.

What to Include in the Gulf War Shadow Box

If you don’t have your loved one’s military records, it can be difficult to know what their shadow box should contain. However, if you know some details about their service, you may be able to determine some of their awards and honors with the help of a Military Awards Specialist from Medals of America.

You may also find you have some things that can be displayed in a veteran’s shadow box regardless of when and where they served. These items make for a perfect starting point for your shadow box.

You will want to include any Gulf War ribbons your loved one may have received, as they contain many important details of their service. Ribbons are awarded for acts of valor and good conduct, but they can also represent the number of campaigns a veteran served and any foreign awards they may have received.

Ribbons can also be adorned with attachments that provide further detail about the specific honor they represent.

Your loved one may have earned at least four different Gulf War medals. If you know where they served and for how long, you should be able to tell whether to display these medals in their shadow box.

These medals are awarded to anyone with 120 consecutive days of service or for any honorable active duty service from 1950-54, 1951-75, 1990-95, and 2001-present. They are also awarded to all members of the military Reserve forces regardless of active duty during the Gulf War.

This medal was awarded to anyone who either participated in or directly supported military operations in Southwest Asia during Operation Desert Shield and Operation Desert Storm between August 2, 1990 and November 30, 1995.

Members of the Armed Forces of the United States from the Government of Saudi Arabia for participation or support of Operation Desert Storm received this medal.

Insignia are worn on the uniforms of military service members in order to display basic details of their service. If you know what branch your loved one served in and you’re able to identify their rank, then you’ll be able to determine the type of insignia they would have worn on their uniform so you can order one for their shadow box.

Any Other Significant Gulf War Items

You can get creative with your shadow box ideas and include a variety of different items. Photographs, dog tags, patches, badges, medallions, an American flag, the flag of the branch in which they served, postcards they may have received, and anything else that represents their service honorably are great items to include. You can even personalize it with a customized brass plate.

Get More with Medals of America

If you’re looking to get started creating a shadow box, you can contact a Military Awards Specialist for help at 1-864-862-6425 or get started with our custom shadowbox builder.