There are a handful of U.S. military medals and ribbons that signify whether a service member has served abroad. One such decoration is the Expeditionary Medal, which is awarded to military personnel for their deployment to a foreign country and active participation in a conflict.

From serving in Cuban waters during the Cuban Missile Crisis to Operation Iraqi Freedom, the Expedition Medal has been awarded for foreign operations as early as 1919 with the authorization of the Marine Corps Expeditionary Medal.

Although each branch has different criteria, Expeditionary Medals are often awarded in scenarios where no other campaign medal or ribbon were awarded. They are ranked above Campaign Service Medals and below Commendation Medals.

What else do you need to know about this unique military medal? Let’s dive right into the four Expeditionary Medals and their significance:

On May 8, 1919, the Corps established the “Expeditionary Ribbon” per General Order No. 33 to recognize “limited service against an opposing force.” Two years later, in 1921, the ribbon was upgraded to the Marine Corps Expeditionary Medal (MCEM).

The MCEM is awarded to Marines who “land on foreign territory, engage in operations against armed opposition or who operate under circumstances deemed to merit special recognition and for which no campaign medal has been awarded.”

While the Corps did not start issuing the medal until 1929, qualifying service for the medal dates back to 1874. Subsequent awards are denoted by a bronze service star, while in the past, numerals and bars with names of battles were used to annotate issuance. For example, during World War II, Marines who participated in operations on Wake Island from December 7-22, 1941 were issued a gold bar with “Wake Island” inscribed for wear on their medal and a silver “W” to display the ribbon.

The Navy Expeditionary Medal (NEM) was established on August 5, 1936 and awarded to “officers and enlisted men of the Navy who shall have actually landed on foreign territory and engaged in operations against armed opposition or operated under circumstances which, after full consideration, shall be deemed to merit special recognition and for which service no campaign medal has been awarded.” 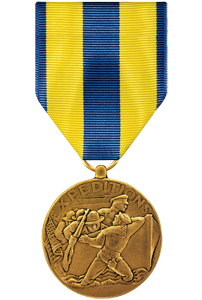 Established in 1961 via Executive Order 10977 by President John Kennedy,

the Armed Forces Expeditionary Medal (AFEM) is awarded to military members who, after July 1, 1958,  participated in a U.S. military operation and encountered foreign armed opposition. It can also be awarded to those who were in significant danger of hostile action by foreign armed forces.

A bronze service star denoted subsequent awards, while a silver star is worn in lieu of five awards. An “arrowhead” is authorized for Soldiers and Airmen awarded the medal for participation in an airborne or amphibious assault. The Fleet Marine Force Combat Operation Insignia is authorized for Sailors assigned to the Fleet Marine Force if they participated in combat operations during their assignment with the Corps. 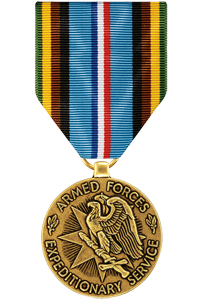 To qualify, service members must have deployed abroad in support of GWOT operations post September 11, 2001, but are only awarded the GWOTEM or subsequent campaign medal and not both for an operational deployment of 30 consecutive days or 60 non-consecutive days; be engaged in actual combat or duty that is equally as hazardous as combat duty; wounded or injured requiring evacuation from the operation; or while participating as a regularly assigned air crewmember flying sorties into, out of, within or over the Area of Eligibility (AOE) in direct support of the military operations. 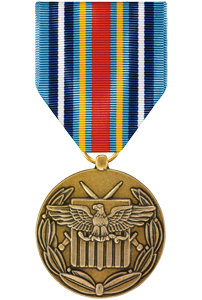 Expeditionary Medals may not specifically denote bravery or acts of heroism, but they do represent your great sacrifice to our nation. Serving abroad is no easy task, and such medals demonstrate your participation in military operations overseas.

If you or a loved one needs a replacement medal or ribbon to add to your personal shadow box, Medals of America is happy to assist you. You’ll love the professional and beautiful design that is worthy of your great military achievements.