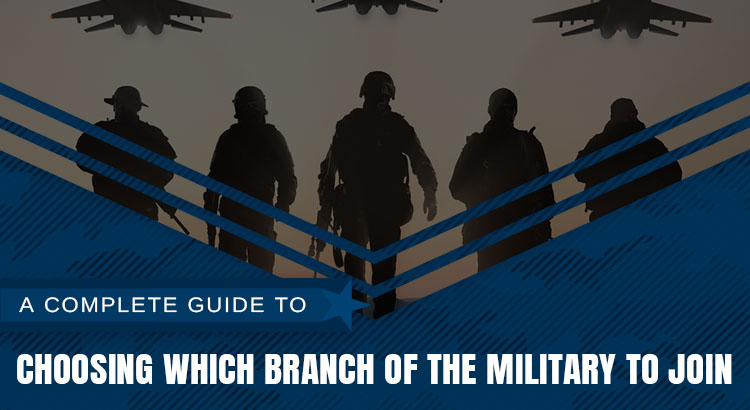 If deciding to enlist with the U.S. military is the most decisive point in a prospective military member’s life, then choosing which branch to serve is the second most decisive. Between enlistment options, incentives, education benefits, family legacy branches and job choices, deciding which branch is best for you can seem more overwhelming than boot camp.

As a team of former military service members ourselves here at Medals of America, we understand that no one makes this choice lightly, which is why we’ve put together the ultimate guide to help prospective members choose which branch of the military to serve during your military career.

THE U.S. MILITARY: A BRIEF OVERVIEW

Joining the military includes a lot more than throwing on your military apparel and participating in daily PT. There is a long and storied history behind each branch of our country’s Armed Forces, as well as detailed rules regarding organization and function. Before choosing a branch or even enlisting, it is crucial to understand the structure and tasks of each branch of the U.S. military.

Today, our Armed Forces are organized according to the National Security Act of 1947. This post-WWII legislation gave us the U.S. Air Force and the modern-day Department of Defense, which consists of three military departments: the departments include the Navy, Army and Air Force.

A president-appointed, civilian secretary heads the Department of Defense and each of the three departments within it.

These departments are responsible for the administration of the five different military branches of the U.S. Armed Forces, including the Navy, Army, Air Force, Marine Corps and Coast Guard.

Highlights: More flexible than the other branches while still offering a strong sense of military life

Commander: The Army Chief of Staff

The United States Army is the largest branch of our military with 471,000 active duty service members. It is also the oldest branch of the U.S. military and remains the main ground-force for our nation’s foreign affairs.

Established in 1775 at the start of the American Revolutionary War by the Continental Congress, today’s Army is tasked with protecting and defending the U.S. and U.S. interests and resources, just as it was during the time of the original patriots.

A four-star general–referred to as the Army Chief of Staff–leads the Army. The Army Reserves and the Army National Guard serve as the Reserve Forces for the Army, with the former being managed and owned by the federal government and the latter answering to the state government.

These forces can be called up to support Army initiatives with both personnel and equipment when necessary, such as during a national emergency like international conflict or natural disaster. In general, members of these reserve forces often live at home and hold civilian jobs, though they can also be deployed alongside full-time members as necessary.

When civilians picture what it is that military members do, they most likely imagine boots on the ground soldiers. As servicemen with one of the combat arms of the U.S. Army, it is most likely that you will be working as the literal boots on the ground in combat zones and acquire the most time in the field working with some of the most cutting-edge military technology and weaponry available in the world.

In the Army, soldiers have the option to pursue additional physical and tactical training for membership in one of the Army Combat arms, including the Army Rangers and Special Forces. Because of the high-intensity training these positions require, not everyone makes the cut and those who do enjoy high attrition rates.

Finally, Army members have the opportunity to travel to various regions and countries across the globe. Typically, Army combatants are sent to conflict zones, such as Afghanistan, Bosnia, Iraq, Iran or Kosovo. However, the U.S. Army also has well-established bases in various other non-conflict areas, including Germany, South Korea and Kuwait.

Highlights: Significant travel and time spent at sea with a less rigid organizational format than that of the Marine Corps or Army

Commander: The Chief of Naval Operations

Although travel is a reality in almost any branch of the U.S. military, it is perhaps the truest for members of the U.S. Navy. This makes it a great choice for prospective service members who are looking to see the world, as there are very few positions within the Navy that do not require substantial time away at sea.

Conversely, prospective members with substantial commitments at home and family may not find that the traveling Navy lifestyle is suitable. Approximately 40 percent of active-duty Navy personnel is assigned to a vessel that is deployed at sea 45 percent of the time at any given point throughout the year, whether or not the U.S. is engaged in conflict.

Commanded by a four-star admiral referred to as the Chief of Naval Operations, the U.S. Navy was established shortly after the U.S. Army and the initiation of the American Revolutionary War in 1775. At its founding, the Navy was tasked with the maintenance and protection of U.S. interests and resources at sea.

Because of this long history, the Navy still strictly follows various customs and traditions, even if life aboard ship as a Navy service member is less structured than it might be in other branches. Just like the other branches, however, the Navy also offers the opportunity for military career-minded members to pursue a position with an elite, special forces faction, such as the Navy SEALS, Navy EOD, SAR Swimmers and SWCC.

Navy members can be tasked with operating heavy guns and cruise missiles from a ship or submarine that is located miles from shore and its intended enemy mark on land. As a member serving on a Naval submarine, these tasks are undertaken covertly.

When it comes to function, the Navy and Air Force often go hand-in-hand. The Navy is typically called up to supplement the Air Force with air power in times of conflict where a traditional, fixed runway and hangar are impossible to access. Naval aircraft carriers typically carry around 80 fighter jets and fighter-bombers and can be deployed to most any ocean in the world.

In addition to supporting the Air Force, the Navy also works closely with the U.S. Marine Corps and is largely responsible for Marine transport.

Though no Naval National Guard exists, prospective Navy members do have the option to join the Naval Reserves for reserve service that is slightly more flexible than the commitment given by full-time members.

As far as military history goes, the U.S. Air Force is the latest addition to the U.S. Military. The branch was established in post-WWII in 1947. Before this, U.S. airplanes were commanded as a faction of the U.S. Army known as the Army Air Corps, whose primary function was to support Army troops on the ground during conflict.

However, as technology developed, it became readily apparent that aircraft had much larger and more significant implications than a simple support tool. After its establishment, the objective of the newly-minted U.S. Air Force became the defense of the United States and its interests and resources via air and space.

In comparison to the other branches of the U.S. Military, Air Force members are the most likely to hold a position that is more similar to those held by U.S. civilians. This is because many of the occupations available to Air Force personnel are similar to those available at any working airport, including logistics, satellite control and administration and the control of strategic ballistic missiles. 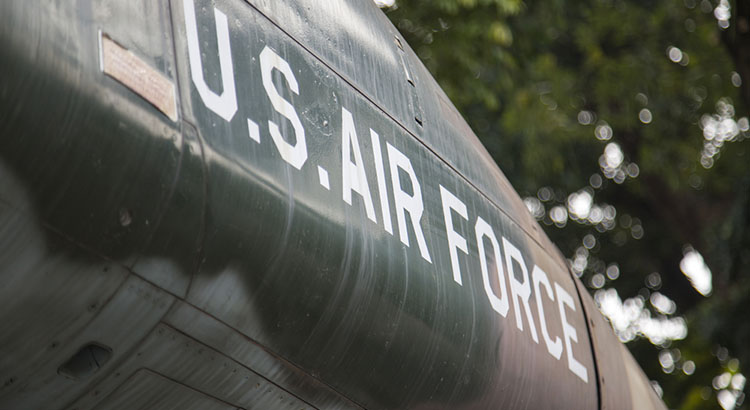 By contrast, very few positions–including the operation of fighter jets, tanker aircraft, heavy bombers, helicopters and transport aircraft–involve actual combat. However, no matter what position a member holds with the Air Force, they can typically expect to spend up to seven months of each year on deployment in countries across the globe, including Iraq, Afghanistan, Kuwait, Kosovo, and Saudi Arabia.

In terms of quality of life, the Air Force is also leagues ahead of its fellow military branches in aspects such as base housing units, and many Air Force members enjoy competitive salary rates after entering the civilian workforce.

However, perhaps because of these advantageous living standards, the Air Force also has the most stringent education and aptitude requirements, making it one of the most challenging branches to join.

The Air Force is supplemented by reserve forces, including the Air Force Reserves and the Air National Guard.

Highlights: Total immersion in the military lifestyle with the most in-depth and substantial training and travel opportunities

Commander: The Commandant of the Marine Corps

Initially established as a landing force for the Navy, the Marine Corps also came about in the post-Revolutionary War period. It was then later re-established in 1798 as a branch of the military specializing in amphibious operations, such as the capture and control of beachheads to secure routes that allow the other branches to engage the enemy from various angles.

Modern-day Marine operations, however, have expanded to include ground force operations as well, including the most extensive marksmanship training of any branch. Every member of the U.S. Marine Corps receives such a high level of shooting training that every Marine is considered a rifleman above their supplementary Marine occupation.

When it comes to their combat operations, Marines are comparatively self-sufficient, even though those of other military branches dwarf the number of active-duty Marines. For example, the Marine Corps operates its fighter, attack helicopter, and fighter-bomber aircraft.

However, as a part of the Navy, the Marine Corps does have close ties to the Navy when it comes to logistical support, including naval transport and medical personnel, as the Marines do not enlist medics, doctors or nurses despite currently running tours in Afghanistan and Iraq.

For anyone looking to join up and completely immerse themselves in military life, the Marine Corps is an obvious choice. Of all the branches in the U.S. Military, the U.S. Marine Corps entails the most prevalent pride of service and commitment to “the Corps.” This deeply ingrained sense of loyalty means that a Marine Corps member isn’t simply in the Marines–rather, they are a Marine.

The U.S. Coast Guard was established in 1790 as the Revenue Cutter Service, later to be reformed to its current name under the Treasury Department in 1915.

Today, the Coast Guard–the smallest branch of the U.S. Military–is administered by the Department of Homeland Security. It commands seafaring vessels as well as aircraft and shore stations for various missions along the U.S. border. This includes law enforcement, immigration control, sea rescue and boating safety, though many Coast Guard missions today are concerned with terrorism and international crime.

Choosing to serve your country–no matter in which capacity, branch or occupation–is a selfless and admirable undertaking, and not everyone has the perseverance, dedication and fortitude required to don military dog tags.

When deciding which branch of the military to join, honestly and thoroughly consider your service commitment, enlistment options, salary, travel and future career requirements to make an informed decision about your choice of military service branch.