Between the five U.S. military branches, there are a host of military medals and ribbons that are awarded each year to those deserving of such recognition. In fact, some people believe that America may have gone a bit too far with some of its more unique military awards (i.e., its dedicated award for those operating drones).

With a slew of different military medals and ribbons, it can be downright confusing for civilians to wrap their minds around. To make things even more complicated, many veterans and service members refer to military medals by their abbreviations alone, leaving civilians largely in the dark as to their specific meaning and significance.

To help clear up some of the confusion and make honoring your family member’s service much easier, here are some of the most common medal and ribbon abbreviations you’re likely to run across and what each one means:

Established in 1945, the Army Commendation Medal (ARCOM) is awarded for heroism, meritorious achievement, or service. This military medal was originally awarded as a ribbon-only commendation until 1960 when it was redesignated as a medal. 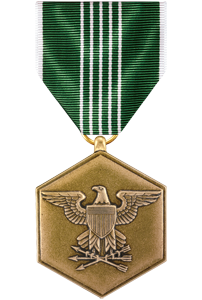 The ARCOM was one of the 12 military awards reviewed, resulting in a change in criteria and making it eligible for new devices. The design, not to be mistaken with the Navy Commendation Medal, features a laurel green ribbon with five white stripes in the center and two white stripes on the outside edge. The medal features an American bald eagle with outspread wings.

Established in 1944 by President Roosevelt’s Executive Order 9419, the Bronze Star Medal (BSM) is the fourth highest ranking award that can be given to a member of the U.S. military. It’s awarded for heroic acts of bravery, heroic service, meritorious achievement, or meritorious service while in combat. 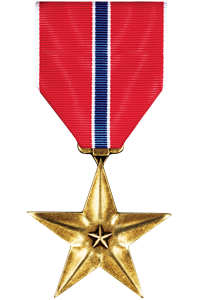 In addition to U.S. service members, foreign soldiers who have served in some capacity with the U.S. Armed Forces are also eligible for this award. The BSM is distinguished by its red, white and blue-striped ribbon, as well as its bronze star with a smaller star inlaid in the center.

At a glance, it’s easy to mistake the Navy Commendation Medal (NCM) for the ARCOM. The ribbon also features a laurel green base with white stripes and a gold medal with an American bald eagle. However, the NCM only has two white stripes on its ribbon. 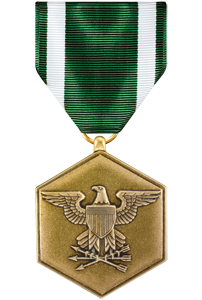 Authorized in 1943 as a ribbon-only award, the NCM became a medal pendant in 1950. The medal is presented by the U.S. Department of the Navy and awarded to members of the U.S. Navy and Marine Corps for heroic acts or meritorious achievements that don’t warrant the Bronze Star Medal.

Established on June 25, 1963, the Joint Service Commendation Medal (JSCM) is awarded to members of the Armed Forces for individual meritorious services or achievements while performing duties in a joint assignment or activity. 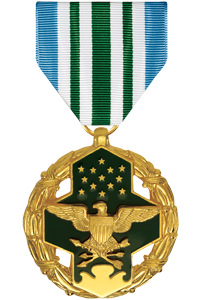 The most senior award of all service individual commendation medals and ribbons, the JSCM features a laurel green center stripe with two stripes of white, green and light blue on either side. The medal design is encased by a circular wreath of laurel and features four hexagons in green with an American bald eagle in the center.

First authorized in 1980 by the Secretary of the Air Force, the Air Force Achievement Medal is awarded to military personnel for meritorious service or outstanding achievement. It may also be awarded to individuals who display acts of courage that are lesser than those warranting the Joint Service Commendation Medal. 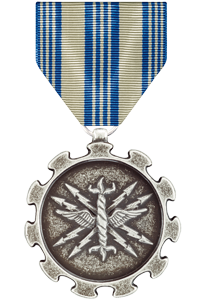 The medal was the first decoration instituted for Air Force members under Air Force authority. Historically, it has been used to award junior officers who have not been enlisted long enough to receive the more prestigious Commendation Medal.

Awarded to both active and inactive members of the Armed Forces, the Navy Achievement Medal (NAM) is presented for meritorious achievement or service in combat or in non-combat situations. The performance must be of a sustained nature as to demonstrate their specific achievement and earn recognition for the act. 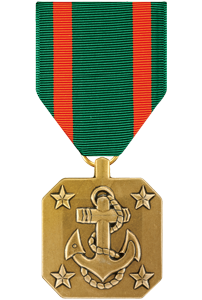 Distinguished by its green and orange ribbon colors and anchor design, the medal ranks below the Navy Commendation Medal and above the Combat Action Ribbon.

In Operation Iraqi Freedom, 18 different awards and decorations were presented by the Army alone, reaching nearly 700,000 awards in total. This isn’t to say that there is a surplus of medals being awarded, but rather to point out how confusing it can be for civilians to make sense of all the different abbreviations used by the five military branches.

Have questions about military abbreviations and meanings? We’re listening. Leave a comment or just let us know how we can help you or a loved one build an authentic military awards display to honor your most prized military possessions.