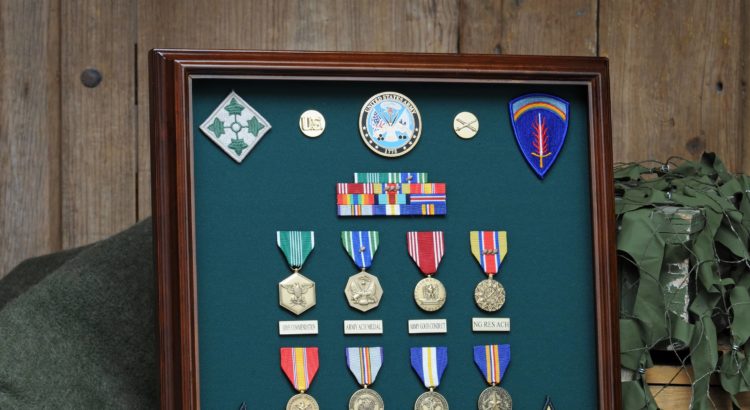 Over the near half-century that the Cold War lasted, countless service members dedicated their lives to protecting America and its citizens from the looming threat of the Soviet Union.

From the Truman Doctrine to the Kennedy Era and the Cuban Missile Crisis to the fall of the Berlin Wall, this long and tense period may have been full of fear and uncertainty, but it gave birth to many heroes.

Those heroes deserve to be remembered for the sacrifices they made in the name of freedom. If you have a loved one who served in the United States military during the Cold War and would like to commemorate their service, one of the best ways to do it is with a Cold War shadow box.

In your loved one’s shadow box, you can place their Cold War service medals, ribbons, patches, commemorative medals, dog tags, and anything else that helps to paint a picture of their time in the service. It can be an excellent gift for the child or grandchild of a Cold War veteran or the veteran themself.

It can be challenging to figure out where to even begin when creating a shadow box for the Cold War veteran in your life, but as long as you include a few key items, the rest is really just a matter of how creative you’d like to be.

You’ll want to see what awards, honors, and personal effects from your loved one’s time in the service you can gather first to give yourself a foundation to start with.

If you don’t have access to these things, you can request a copy of your loved one’s official records from the branch they served in. That will give you an idea of the medals, ribbons, badges, and insignia you may want to include in the shadow box. You can then order exact copies of these items for your display.

Once you’ve got all of the items you want to include in your shadow box, you can get a basic idea of the dimensions of the shadow box you’re going to need. Then, pick out the perfect one, and begin telling the amazing story of your loved one’s service.

What to Include in Your Shadow Box

While every service member is going to have a unique set of medals, badges, ribbons, and insignia by the end of their career, there are certain items you can make sure that they received, provided you know what branch they served in, when and where they served, and how long they served. 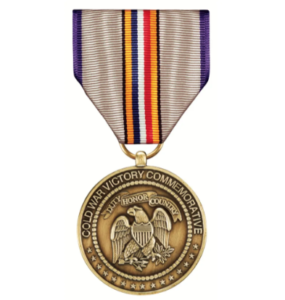 Unlike other wars in which there was a direct military conflict, there actually was no Cold War medal that was handed out specifically for service during this period. However, there is now a Cold War Commemorative Medal that will make a great inclusion in your Cold War shadow box.

This beautiful medal is made of bronze, and it includes the image of a seated woman holding a sheathed sword along with the words “Cold War” and “Promoting Peace and Stability” on one side and “In Recognition of Your Service” on the other.

The Cold War commemorative medal was an idea born from the Cold War Recognition Certificate, which was created on November 18, 1987, to officially recognize all members of the military, as well as civilian personnel, who served our country between September 2, 1945, and December 26, 1991.

If your loved one served during this period, they are eligible to receive this certificate, but they may not have received it yet. If you’d like to include it in your shadow box, there is a Cold War medal application they can fill out to receive theirs for free.

Even if you can’t get the Cold War Recognition Certificate, remember that you can still acquire a commemorative medal for your display.

Some groups are interested in figuring out how to officially get Cold War service medals to be authorized by Congress. In 2021, a bipartisan bill called the Cold War Service Medal Act was presented to Congress, which sought to present a service medal to members of the Armed Forces who met any of these criteria:

The bill is currently under review. In the meantime, the Cold War commemorative medal serves to honor these veterans until they officially receive their due recognition.

In addition to Cold War ribbons and medals, there are some other items you’ll want to include in your Cold War shadow box if you want it to be complete. For example, you will want to gather some photographs, mementos, and other personal items. These personal items can even include items like dogs tags and ID cards.

Aside from these personal items, there are other commemorative pieces you may want to include in your Cold War shadow box, such as: One thing that can add a lot of character to your shadow box is the Cold War Veteran Challenge Coin. Similar to Cold War medals, this commemorative coin is designed to honor all U.S. veterans who served during the Cold War.

Another great addition to your shadow box is at least one of the many Cold War veteran patches that are available.

If you’re interested in more in-depth guides about military awards and military history, sign up for emails from us. And if you’re ready, start building your Cold War shadow box today!

You can contact a Military Awards Specialist at Medals of America, and they can walk you through the whole process. Just call 1-864-862-6425.