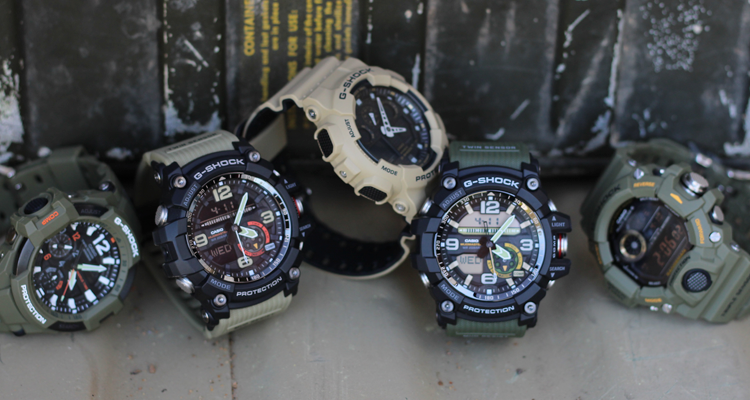 From the inception of the G-Shock brand back in 1983, this watch has become an instant classic.  With its ability to withstand extreme weather, high shock absorbency, and all-around toughness it’s been a top choice for watch enthusiasts, active duty military, and fashionistas for almost 35 years.

Are they really worth the money?

Absolutely! Medals of America only carries the highest quality brands and G-Shock is no exception.  G-Shock watches are veteran tested and approved. The Casio G-Shock watches are extremely popular for a reason: they are made to last and come with dozens of features.  Trusted by current and former military, police, firemen, outdoor enthusiasts, and everyone who has ever worn one.

With all of their features, durability, and overall quality, G-Shocks have stood the test of time, have been the watch of choice over designer brands, and are beloved by veterans, police, firefighters, and patriots.  Sweat, dirt, grime, mud, and water aren’t things you think about affecting a watch when you’re wearing it, but  to G-Shock, it is.  The core design of every G-Shock is multiple layers of protection so your watch will be performing as new 10 years down the line.

If you have a bigger budget and want your G-Shock to perform beyond your expectations, the G-Shock Mudmaster is right up your alley. It is engineered and crafted to be able to survive a Spartan Race, a swamp if that’s where you end up during Ranger school, the desert, driving heavy machinery, literally anything.

It is renowned for its mud resistance, multifunctional capabilities, and level of protection for all buttons and switches on the watch.  The Mudmaster is solar powered, water resistant up to 200 m, has a sapphire crystal watch face, shows barometric pressure, temperature, and cardinal directions.

1. The Brand: Casio is a well known, trusted, and respected watch brands and offers high quality and premier products for men, women, and kids.  The G-Shock was obsessively designed and engineered in 1983 and since then has been a staple in the lives of former and active military, police, firefighter, avid outdoorsmen and explorers. It’s popularity and devoted customer base is reason enough to trust us when we say it’s well worth it.

2. Product Features: G-Shock watches are much more than just an analog or digital watch: they survive battlefields, the most enduring weather, mud, dirt, and, debris, literally anything you wear it through. They all have a sapphire crystal face that won’t scratch or crack, read 28+ time zones and cities across the U.S., have shock resistant technology, and set alarms.

Each watch has its own set of capabilities; like the Rangeman will keep you on track in the wilderness by showing altitude, temperature, direction, and barometric pressure, the Mudmaster has a virtually indestructible build that can survive even the toughest conditions.

3. Durability: Did you know that G-Shock earned the Guinness World Record for the heaviest vehicle to drive over a watch? Now you do!  In 2017 G-Shock took the title after a 24.97 ton truck drove over one of their watches.

On top of that the G-Shocks are made to be shock resistant, translated to: you can drop them, throw them, fall from something, drive heavy machinery the watch will be perfectly fine.

4. Style: Since G-Shock was created in 1983, the style has changed drastically from their blocky square 1980s design to sleek and sophisticated style that you see today.  They keep their durability and functionality while still being sleek and sophisticated.  For the fashion forward that don’t want to sacrifice looks for practicality, these watches are for you.

5. Trusted by Members of the Military: Casio G-Shock is renowned for being the ultimate watch worn by active duty service members of all branches. Here at Medals of America, we want to bring the same trusted brand to you, active duty, veteran, or civilian.

You need to be prepared for literally anything, and our line of watches we hand selected will do just that.

From G-Shock we offer five tactical, stylish, and badass styles we know you will love.  We chose watches from the Master of G collection because they are some of the most top performing, rugged, and durable watches G-Shock has to offer.  Master land and sky with our collection of watches.

The Rangeman is made for the adventurers, daring, and unafraid.  It is designed to withstand the most rugged conditions imaginable and still give you easy access to its multiple features. The Rangeman is equipped with Shock Resistant Triple Sensor, and it’s as cool as it sounds: reading barometric pressure, temperature, direction, and altitude all at your fingertips.

It’s a top choice for rescue crews, rangers, and anyone else who demands reliability and performance.

The Mudmaster is G-Shock’s first watch to feature mud resist construction, which keeps the watch performing when you’re down in the mud and sludge and need G-Shock level of reliability.

On top of that protection the Mudmaster also has Triple Sensor like the Rangeman, it has Multiband 6 technology, which means it can automatically adjust its time settings based from calibration signals around the globe from: Japan, China, United States, England, and Germany.

Go sky high with the Gravitymaster from G-Shock because it can keep up with altitude changes, intense vibrations, and has easy access to compass and temperature readings.

The Layered Band watch was inspired by the iconic duo-colored flight jacket to create a more militant look.  It has an analog-digital and antimagnetic watch face.  The black and khaki color scheme has a classic military feel to it and we know you’ll love it for the durability, look and feel, and it’s classic G-Shock engineering.

The design and feel will bring you back to your days in the military with your watch that you wore everywhere, always depended on, and that never let you down.