Animals have long been an integral part of American military efforts. Dogs first went to battle with their owners during the Revolutionary War and were officially employed by the U.S. military during World War I with the deployments of famous war dogs Sergeant Stubby and Rags. Horses were also vital to that war effort, providing transportation of troops and goods and acting as mobile combat vehicles in the cavalry. Right now, there are about 1,600 military working dogs on the frontlines, including some who serve alongside our military service members in Iraq and Afghanistan, K9 units that can detect explosives (including IEDs) and service dogs who assist our military veterans during post-war recovery. 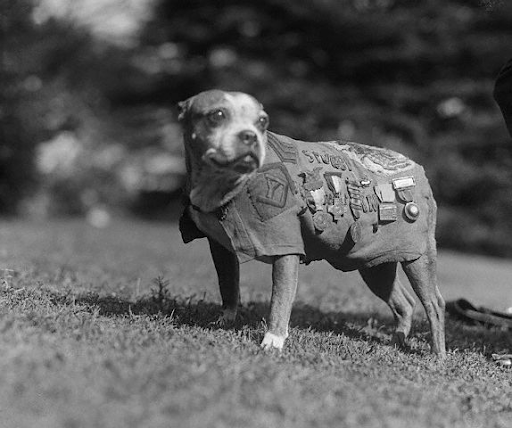 Animals, like their two-legged counterparts, are capable of exhibiting exceptional valor, sacrifice and accomplishment while serving their country in combat. It is for these reasons that the Armed Forces has recognized them with service medals and ribbons. Indeed, military working animals can be recognized for their heroism, whether they have served in combat or assist veterans in post-war recovery. With that said, modern-day service animals are not eligible to receive certain service medals.

Whether or not animals can officially earn service awards is a complex subject. The first dog to ever earn a Purple Heart was a German Shepherd mix named Chips, who was a national war hero after helping to capture 10 Italians during World War II. As a reward for his efforts during the war, Chips was awarded a Silver Star, a Distinguished Service Cross and a Purple Heart in 1943. However, after a Purple Heart national commander protested to the War Department, Chips was stripped of his Purple Heart and Silver Star. In the end, Chips was allowed to keep his awards, but the War Department decided that no more official military medals would be awarded to military dogs.

Now, particularly brave military animals can earn prestigious awards given by the non-profit animal organization American Humane and various other animal welfare groups. The top honor given to military pups is American Humane’s Lois Pope K-9 Medal of Courage. Last year, it was given to five gallant canines who completed heroic acts such as uncovering improvised explosive devices (IED) and providing protection of troops on missions and patrols.

The U.S. War Dogs Association also presents the Military Working Dog Service Award to dogs who have actively participated in ground or surface combat with the Army, Navy, Marine Corps, Air Force or Coast Guard. Think of this award as a Combat Action Ribbon for military working dogs. The PDSA Dickin Medal, given by the British animal welfare organization The People’s Dispensary for Sick Animals, is awarded to distinguished animals who have served since World War II and is considered the equivalent of the Victoria Cross for animals.

So can service animals receive medals? The answer is yes, but today they cannot earn the same medals that can be earned by human military service members. 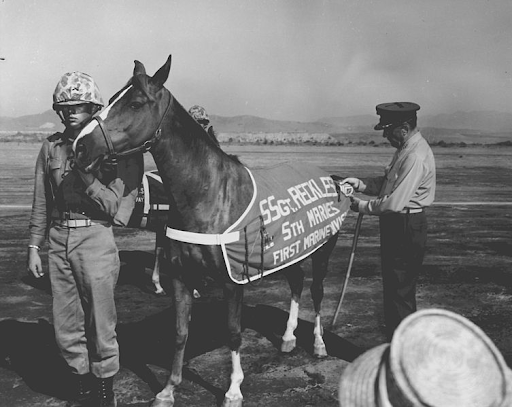 Historically, the United States Armed Forces has recognized the sacrifice and bravery of military animals through both official awards–before they were officially banned when given to canines–as well as special honors designed specifically for enlisted animals. Here are some of the most famous and most decorated military animals to serve.

Chips (Dog)—Trained sentry dog Chips may have been retroactively stripped of his decorations, but he left a lasting legacy nonetheless. For attacking Italian machine-gunners and saving the life of his handler, and later helping to take 10 Italians as prisoners, Chips earned a theater ribbon with an arrowhead device as well as battle stars for each of his eight campaigns. In 2018, he was posthumously awarded a PDSA Dickin Medal.

Sergeant Stubby (Dog)—Serving in the trenches in France for eight months during World War I, Sergeant Stubby spent an entire month under constant fire in combat. He was wounded by a hand grenade in his foreleg and was later injured by mustard gas. The injuries earned him two wound stripes. Stubby was honored with an honorary Purple Heart and a Humane Education Society Gold Medal for his service.

Sergeant Reckless (Horse)—Decorated War Horse Staff Sergeant Reckless is one of the most decorated horses in military history. Reckless served in several combat actions during the Korean War, carrying ammo and other supplies and evacuating wounded soldiers, and was wounded in combat twice. For her service, she was awarded two Purple Hearts, the Dickin Medal, two Navy Presidential Unit Citations and four Korean Service Medals, among others.

Smoky (Dog)—A 4-pound Yorkie who served in World War II, Smoky was transformed into a war hero after being discovered by an American in the New Guinea jungle. She was best-known for spending long hours warding off enemy fighters and parachuting 30 feet from a tree using a specially made parachute. For her efforts in the war, Smoky was awarded eight battle stars and later earned the PDSA Certificate for Animal Bravery or Devotion. The Yorkshire Terrier National Rescue organization annually awards the Smoky Award in honor of this famed pup.

Lucca (Dog)—Perhaps the most famous dog to serve in Afghanistan, Lucca was a German Shepherd-Belgian Malinois mix who was trained to detect explosives. During her six years of service with the Marines, Lucca completed over 400 missions, with not a single human fatality occurring under her watch. She was injured by an IED and had her leg amputated during service, leading to her official retirement in 2012. Lucca was the first Marine Corps working dog to be honored with the PDSA Dickin Medal for her efforts. She also earned an unofficial Purple Heart for her bravery. 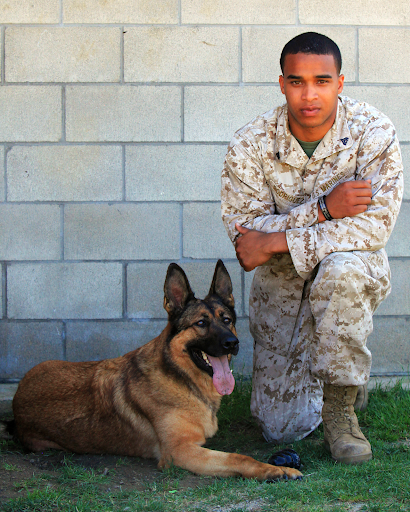 Lucca earned a Dickin Medal and an honorary Purple Heart for her six years of service as a detection dog in Afghanistan.

The Strengths of Military Animals

Just as top-ranking human military service members have strengths and skills that make them particularly valuable in military applications, so too do military animals. Military canines are able to sniff out danger—including IEDs, bombs and chemicals—and use their superhuman noses to locate casualties. Horses and mules were once essential for their physical strengths that allowed them to carry people and supplies for long distances. Perhaps most importantly, military service animals provide our service members and veterans with the comfort and companionship needed in stressful military environments. They are as important a part of our military’s actions now as they ever were in the past. It has a proud history of its own!