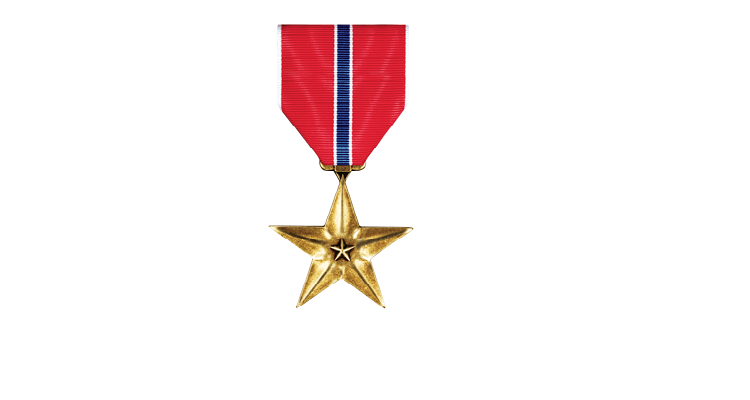 Criteria: The Bronze Star Medal is awarded to individuals who, while serving in the United States Armed Forces in a combat theater, distinguish themselves by heroism, outstanding achievement or by meritorious service not involving aerial flight

Authorized on February 4, 1944, retroactive to December 7, 1941. These military medals are awarded to individuals who, while serving in the United States Armed Forces in a combat theater, distinguish themselves by heroism, outstanding achievement or by meritorious service not involving aerial flight.
The Bronze Star was originally conceived by the U.S. Navy as a junior decoration comparable to the Air Medal for heroic or meritorious actions by ground and surface personnel. The level of required service would not be sufficient to warrant the Silver Star if awarded for heroism or the Legion of Merit if awarded for meritorious achievement. In a strange twist of fate, the Bronze Star Medal did not reach fruition until championed by General George C. Marshall, the Army Chief of Staff during World War II. Marshall was seeking a decoration that would reward frontline troops, particularly infantrymen, whose ranks suffered the heaviest casualties and were forced to endure the greatest danger and hardships during the conflict. Once established, the Bronze Star virtually became the sole province of the Army in terms of the number of medals awarded.
Although Marshall wanted the Bronze Star Medal to be awarded with the same freedom as the Air Medal, it never came close to the vast numbers of Air Medals distributed during the war. The only exception was the award of the Bronze Star to every soldier of the 101st Airborne Division who had fought in the Normandy invasion, Operation Market Garden in Holland, the Battle of the Bulge or were wounded.

After the war, when the ratio of Air Medals to airmen was compared to the numbers of Bronze Star Medals awarded to combat soldiers, it became clear that a huge disparity existed and many troops who deserved the award for their service had not received it. Therefore, in September 1947, the Bronze Star Medal was authorized for all personnel who had received either the Combat Infantryman’s Badge (CIB) or the Combat Medical Badge (CMB) between December 7, 1941 to September 2, 1945. In addition, personnel who had participated in the defense of the Philippine Islands between December 7, 1941 and May 10, 1942 were awarded the Bronze Star Medal if their service was on the island of Luzon, the Bataan Peninsula or the harbor defenses on Corregidor Island and they had been awarded the Philippine Presidential Unit Citation. The Bronze Star Medal also replaced some awards of the Purple Heart from early in World War II when that medal was awarded for meritorious or essential service rather than for wounds.

Recipients of the Bronze Star Medal are entitled to wear a “V” device on the ribbon bar and suspension ribbon if the Medal is awarded for heroism in combat. The “V” device was approved in 1945 to clearly distinguish between awards of the medal for heroism in combat or for meritorious service. Additional awards are denoted by bronze and silver oak leaf clusters or gold and silver stars, depending on the recipient’s Service Branch.

Medals of America also offers military medals mounted for wear as well as a full line of military ribbons.

Customer needs to contact a Military Awards Specialist at 800-308-0849 to purchase the Bronze Star Medal.