The Army authorized the wearing of a Combat Service Identification Badge (CSIB) for Army soldiers who have served in combat with a U.S. Army major command.

Examples include the following:

This is not exclusive to regular Army units, but also Army Reserve and National Guard units like the historical 42nd Infantry Division “Never Forget” and the 28th Infantry Division “Fire and Movement, Roll On” of Pennsylvania. Each distinctive Army CSIB insignia signifies the wearer is a combat veteran of that particular Army Corps, Division, Regiment or Special Forces command; therefore, that person is entitled to wear the CSIB proudly. It is earned through service in a declared combat zone.

In the past, soldiers were authorized to wear a shoulder sleeve insignia (SSI) on their right sleeve of the Army Green Service Uniform and/or their camouflage pattern Battle Dress Uniform to note their “former wartime service” with a particular Army unit. Today, soldiers are authorized to wear the SSI on their combat uniforms but the CSIB has replaced the colored unit insignia on the dress uniform. While different, both signify combat service and the hardships of deployment under fire from America’s enemies in faraway lands.

The CSIB is only authorized for wear with the Army Service Uniform (ASU) and not the Army Combat Uniform (ACU) nor the discontinued Army Green Service Uniform. The CSIB is a metallic heraldic device, two inches in height, worn centered on the right front pocket of the ASU for males, and on the right at the waistline for females. It’s a symbolic Army insignia that is both unique to the Army unit it represents and the individual soldiers who proudly served within its ranks. Pride, dedication, honor and service are exemplified with the CSIB fully displayed on the soldier’s uniform. It unites all soldiers, past and present, who served in combat with a particular unit.

Additionally, the CSIB is authorized for wear on the Army’s mess dress uniform on the male and female jacket. The insignia is displayed again on the right side between the top and middle button of the mess dress jacket. When wearing the CSIB, only one insignia is authorized for wear at a time, but it can be worn with joint and Army staff badges like on the ASU. The joint and Army staff badges are worn on the left side of the ASU and Army mess dress jacket.

Medals of America will proudly provide you with you or your loved one’s well-deserved CSIB, medals, ribbons, badges and patches and other uniform accoutrements for display on their sharp-fitting uniform. If you have questions pertaining to how to wear these items, ensure you review the latest service specific regulations regarding how to display your CSIB properly.

Today’s generation of soldier has likely served with multiple Army units during combat in Afghanistan, Iraq and other places around the world as part of Global War on Terrorism: Operation Enduring Freedom, Operation Iraqi Freedom, Operation Inherent Resolve and Operation Freedom Sentinel. The CSIB and shoulder sleeve insignia are pervasive in the Army’s formation and an important part of the Army’s heraldry, history and traditions. It represents service to a nation during times of crisis against America and its allied enemies, and links generations of Americans who proudly served the United States of America in its Armed Forces, specifically the U.S. Army. 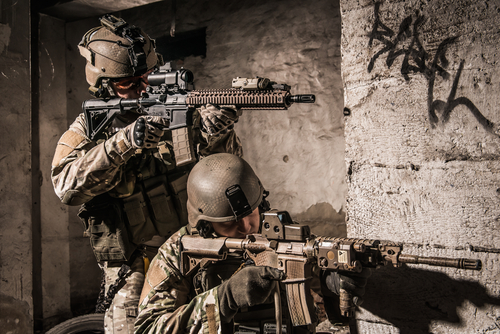 So, if you see a person displaying an Army CSIB or SSI on their ASU, or someone wearing an Army unit patch on the right sleeve of a jacket or shirt, you can ask, “Did you serve in combat with them?” And they will proudly exclaim, “Yes, yes I did!” And you can reply, “Thank you for serving our nation in combat!”