The Air Medal was instituted in the throes of WWII, in September 1942, and is awarded to any member of the U.S. Armed Forces. Since the award was instituted during WWII, it is retroactive to September 8, 1939.

The eligibility of the Air Medal has changed since its inception in 1942. The base requirement of the medal is “single acts of achievement to any member of the U.S. Armed Forces who distinguished themselves by heroism, outstanding achievement, or by meritorious service while participating in an aerial flight”.

While following this guideline, many Army Air Force units started awarding the Air Medal to those who shot down enemy planes or for every twenty missions completed. This “quota basis” racked up the amount of Air Medals awarded; after the end of the war the Air Medal was awarded over a million times.

Much like the use of the Bronze Star medal during WWII to combat soldiers, the Air Medal also served as a token of appreciation and service for those who risked their lives in the air.

“Strikes” includes actions like search and rescue and are met with enemy opposition, evacuation of personnel in an assault, or delivering heavy artillery against the enemy.

“Flights” have the same requirements as strikes but do not come across enemy contact or opposition.

With the creation of the Aerial Achievement Medal in 1988 the Air Force stopped awarding the Air Medal for non-combat achievements. 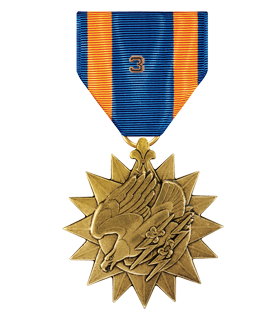 During the Vietnam War the Army established the Bronze numeral attachment to denote multiple awards of the Air Medal.

The ribbon is ultramarine blue with two gold-orange stripes, honoring the original colors of the Army Air Force.