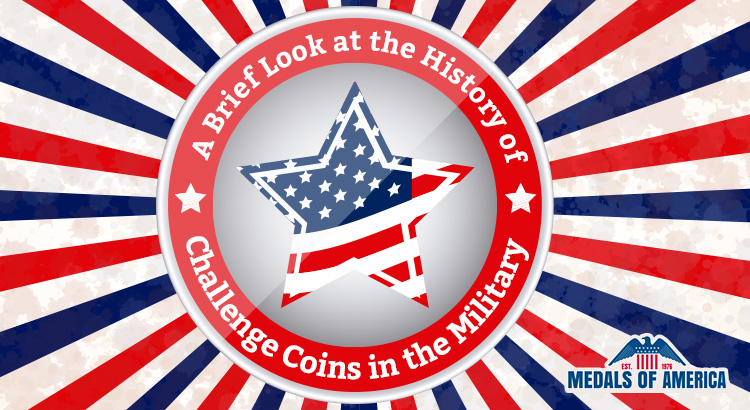 The Romans Built this Place

During ancient times, kings and emperors shaped precious metals with their image as currency for the exchange of goods and services. The Roman Emperor Maximus was one such leader who also had legionaries who fought for Rome. The legionnaire was not always a Roman citizen, but often mercenaries who fought for payment of their professional skills. They were often rewarded handsomely by the emperors of Rome for their exploits in battle, as it was in the best interest of the emperor to keep his military force well financed. The payment of legionnaires in pressed, metal coins is likely the first recorded military challenge coin in the history of warfare and, if not, it’s a good place to begin. The Romans were among the first to stamp precious metals into coins, and given their veracity of large-scale military forces, why not bestow upon the Romans the mythological origin of challenge coins.

The Great Wars of the World

One particular story dates military challenge coins back to World War I (1914-1918) and a wealthy military officer who had bronze medallions struck with his flying squadron insignia stamped on them. He presented the coins to each member of the squadron before they departed on missions over Europe. One day, a pilot was shot down over Germany and later captured by German soldiers and held captive as a prisoner of war. He was stripped of all personal belongings and identification by the Germans and only had his personal clothing and a small leather pouch that contained a squadron coin inside. The pilot eventually escaped his German captors and made his way back to France. The French, who retained him, thought he was a spy. Upon discovery of the squadron medallion, he was recognized as an American and later returned to his unit. The coin saved his life and earned him the recognition as an American Soldier.

Clandestine Operations in the Vietnam War

The United States of America’s entrance into the Vietnam War (1956-1975) first consisted of U.S. special operations forces working with the Central Intelligence Agency (CIA) conducting clandestine operations against the North Vietnamese Army and Viet Cong. The nature of the military clandestine mission was such that the actions of many American special operations Soldiers were not recognized overtly by the United States Army with medals and ribbons. The 1st Special Forces Group (Airborne) participated in many of these clandestine missions over the years in Southeast Asia with little to no fanfare.

As legend has it, the Commander and Sergeant Major of the 1st Special Forces Group (Airborne), in order to properly recognize their men, designed a military challenge coin to present to them. On the front was the unit’s name, a beret flash with the numeral one in the top right and a sword pointing up, signifying the unit was ready for combat, and an eagle on top spreading its wings. On the reverse side, was the Special Forces motto “De Oppresso Liber,” the traditional green beret, a bayonet and scroll and a blank space to enumerate the coin for prosperity. The command kept a detailed registry to record the name, date and mission of each recipient. The 1st Special Forces Group (Airborne) coin was a way for the command to formally recognize their men and their accomplishments when formal acknowledgment by the Army was openly frowned upon.

The story of the 1st Special Forces Group (Airborne) presenting coins to men in secrecy deep in the jungles of Southwest Asia is a story of legendary proportions. The dark, shadowy nature of the special operations forces coupled with the CIA only adds to the mythological nature regarding the historical origins of military challenge coins.

Today, the 1st Special Forces Group (Airborne) retains the original design it had during the Vietnam War, and it continues to conduct missions throughout Asia as part of its heritage. The coin is legendary, as its own history within special operations lore only adds mythological proportions as to the true origins of military challenge coins. The tradition continues then and now.

Today, a popular tradition at unit social functions, formal events and in local bars is the “coin check.” The popular coin check dates back to the Vietnam War and the bars run by military service members at the forward operating bases (FOB) and combat outpost (COB). As the story goes, military service members were to present enemy bullets or their unit challenge coin to gain entrance into the bar. 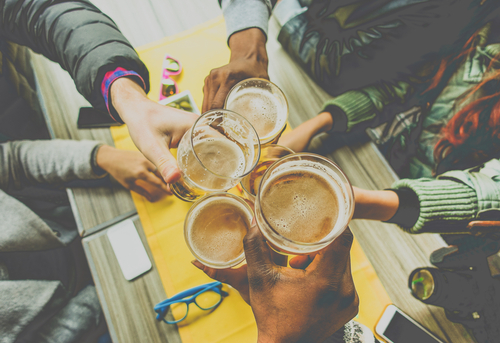 The tradition continues today when someone yells out “coin check” and then slaps their coin onto the bar and all military members–active duty and veterans–are to respond in kind by placing their coin on the bar. The last one to present their coin or the one who shamefully is without theirs has to buy the round of alcoholic drinks for the group. Oftentimes, there are strong verbal arguments initially regarding whose coin is more senior to the other coins. The older the coin, the more senior. But also, the more senior in rank the person’s coin is, based on rank of the presenter, wins out in the end.

The coin check is a great icebreaker and gets folks talking about their personal experiences. It brings out the pride many of our service members feel regarding their service during a specific era, a specific branch and a specific mission they participated in. It starts the stories flowing at the bar that last well into the late evening and early morning hours.

The Eagle and Angler Latch on to the Idea

Prior to the 1990s, military challenge coins were seemingly only prominent with the members of the United States Armed Forces and limited to specific military units with a deep history and lineage. After that timeframe, challenge coins seemed to explode in all sectors of government and the private sector as leaders and organizations recognized the value of challenge coins and their uniqueness in quickly acknowledging people on the spot.

The first president of the United States to stamp a personal challenge coin was number 42, President William (Bill) Jefferson Clinton. With that, the first vice president to mint his own coin was number 46, Vice President Richard (Dick) Bruce Cheney. President George W. Bush often presented his POTUS challenge coin to wounded and injured troops returning from combat in Afghanistan and Iraq. President Barack Obama made it a point to present his POTUS challenge coin to the service member stationed at the stairs of Air Force One as he boarded the plane. Secretary of Defense Robert Gates presented his SECDEF challenge coins to the troops in Afghanistan during his visit in 2011, and often presented them to the troops as he visited them around the world. 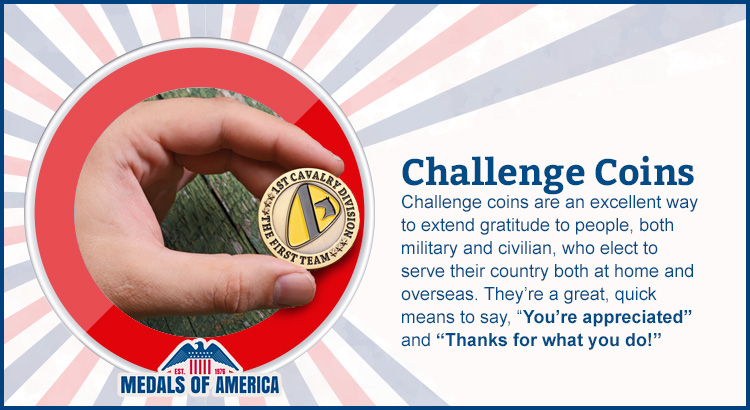 All over the United States of America, its civilian and military leaders from the President of the United States, the Secretary of Defense, the Chairman of the Joint Chiefs of Staff and many more have each had a coin stamped in copper, bronze or nickel to present to deserving Americans. The challenge coins are an excellent way to extend their gratitude to the people, both military and civilian, who elect to serve their country both at home and overseas. They’re a great, quick means to say, “You’re appreciated” and “Thanks for what you do!” and are well-received by those who get them with a secret handshake.

Challenge Coins for Everyone

Today, challenge coins have permeated private business sectors, as well as professional organizations and associations in the United States. Organizations like the Boy Scouts of America, the Professional Golfers Association and Harley Davidson riding clubs, to mention but a few, have their own challenge coins, as well as financial institutions like USAA and Quicken Loans. The challenge coins are representative of their overall group or specific to an event as part of their corporate sponsorship. They are easy to handle and make great gifts to commemorate the event for the participants and spectators.

The National Football League, Major League Baseball, the National Hockey League, National Basketball Association and other sports organizations have gotten into the game of challenge coins, stamping coins with their team logo and championships for their fans to purchase and enjoy. It’s a great way for fans to collect memorabilia of their favorite team and its accomplishments.

If you ever enter the home or office of a military service member, or that of someone who has served with the military, you will likely see their challenge coins displayed handsomely as part of their decor. Many proud recipients display their challenge coins in an open coin holder, a display case or place them on their desk or table. They say, “I’ve been there, done that and was recognized for my contributions.” They are part of a person’s personal history and travels and are a great conversation starter, especially between two people who have the same challenge coin. They are best displayed in the open and proudly in a holder or case that recognizes their importance to the owner of the coins. 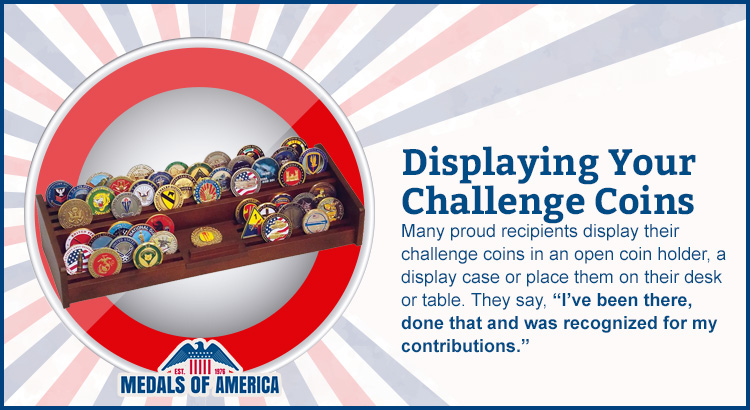 Designing Your Own Challenge Coin

Do you or your organization have a unique custom challenge coin pressed in metal? Medals of America is here, if you need us, to take your challenge coin full spectrum–from idea to concept to the press to the handshake. Make it unique, special and representative of your organization’s or association’s personal history. Your challenge coin will represent the pride everyone has in your group, and you can even design a challenge coin that is not only beautiful but functional as well–like one that functions as a bottle opener for your organizational or personal bar. It will provide you a means to recognize excellence, superior accomplishments, improve morale, display your patriotism or simply provide a token of appreciation for those in your formation who deliver. They are a seriously competitive yet wildly entertaining part of military and civilian culture today and have a mythological and even legendary past.