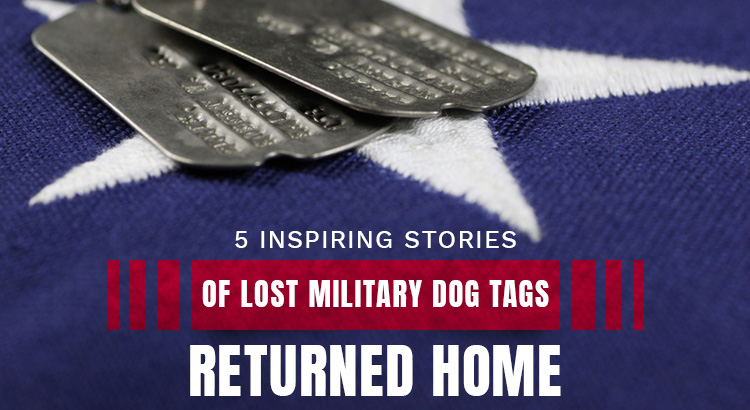 For civilians and military personnel alike, military dog tags are so much a part of our image of military life. They are as evocative and reminiscent as camo and combat boots.

Initially introduced as a means of identifying fallen soldiers, dog tags have become the central figure in miraculous and inspirational accounts of tags found and returned after 20, 60 and 80 years to the families of fallen soldiers–and even to the soldiers themselves.

BUT FIRST, SOME HISTORY

The use of military identification tags dates back to China in the mid-1800s. They received the informal nickname “dog tags” as far back as 1870 when troops in the Prussian Army began to call their tags Hundemarken due to their resemblance to those worn by dogs.

Not long after, American and British forces began to issue a set of custom military dog tags to each soldier as a means of keeping burial records during WWI. One tag remained with the deceased soldier and the other was taken for records and burial service accuracy.

The original tags included the soldier’s name, religion, blood type and other medical information, with a personal identification serial number being added to the tags in 1918.

Before dog tags, soldiers had to rely on inscribing their names on pieces of paper or their clothing for identification in case of death in combat. As such, the number of unknown soldiers of earlier conflicts, such as the U.S. Civil War, was as high as 50 percent.

Military ID tags solved this problem and have since become a quintessential aspect of the life and loss of a soldier and has given us beautiful, seemingly impossible stories of lost tags finally making their way home. Here are five of our favorites:

When Jill Waddle, a Porterville, California native, initially received a message about her grandfather’s dog tag over Facebook, she understandably thought it was a scam.

After all, Herbert A. Campbell, Waddle’s grandfather, had lost his dog tags almost 80 years ago in Northern France near the border of Belgium during WWII.

The message came from Sebastian Vatin, a French farmer who claimed to have found the dog tag in Northern France four years prior and had been looking for Campbell’s family through social media ever since.

After confirming with family members that Vatin had also reached out to them and cross-checking what she knew about her grandfather’s service during WWII, Waddle responded to the message request. After only a few more messages, it was confirmed that the number on the dog tag matched her late grandfather’s military paperwork. The dog tags did indeed belong to Herbert Campbell. 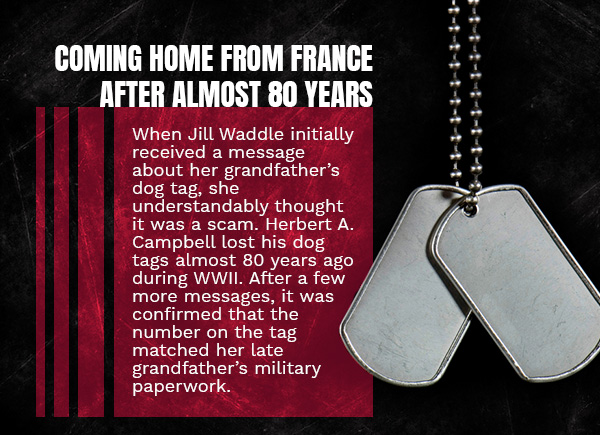 Campbell was drafted into the United States Army in 1942 and served in France and Germany throughout the war. It is likely he lost his tags during this time, only to be found more than seven decades later by Vatin.

The French farmer sent the carefully wrapped tags to the U.S. not long after confirming they belonged to Waddle’s family. When asked about the astounding find by the Visalia Times, Vatin said that his only regret was not reaching out sooner–Herbert Campbell died at age 90 on May 9, 2015, one year after his tags were found.

But for Jill Waddle and Campbell’s family, Vatin’s gesture of goodwill in returning the tags was miraculous in itself. A family heirloom, Herbert Campbell’s returned dog tags will now serve as a testament to the WWII vet’s quiet courage and selfless nature, as well as a reminder that this type of character still exists in the world, even after nearly 80 years.

Geocaching is a relatively new recreational trend that gets participants out from in front of the TV and into the outdoors. It is a real-life treasure hunting activity that can include clues, camping and GPS tracking to find the more than two million geocaches (hidden treasures) buried in woods, parks, trails and cities all over the world.

Kelley Piekarek was geocaching in northern Michigan in early 2015 near Ann Arbor when she found more than she anticipated. Hanging twisted on a tree was a weathered set of genuine military dog tags. Then and there, she decided to find their owner, Raymond Morin.

But after contacting the Armory and Veterans’ Affairs, posting to Facebook and following a lead in Wisconsin, her search had not led anywhere–a frustrating circumstance for an experienced geocacher.

The GPS-pro then made the unlikely decision to revert to the old-school means of tracking people down via the White Pages and struck gold. She was able to locate Henry Morin, Raymond’s father, living in a town nearby. After speaking with Henry and learning about his son’s service in the military and his penchant for hiking, Kelley was confident she had finally made the match.

Not long after, she met with Raymond and returned his dog tags. During the meeting, she learned they had been missing for more than 25 years only two miles away from where the veteran lived.

For Kelley, the search was an uplifting one and a can’t-miss opportunity to be a hero’s hero. It taught the geocacher the importance of doing good for the sake of doing so, and that sometimes, the treasure at the end of a treasure hunt is the opportunity to do good for a community and ask nothing in return.

William Mummers of Washington Township in North Jersey was only 25 years old when he enlisted and was sent for amphibious training in Florida, later to take his part in the Battle of Normandy and D-Day landings.

Fast forward to the Gulf Coast in the 1980s and a woman named Ann K. Etheridge. An avid outdoorswoman, Etheridge liked to spend her time combing the beach with her metal detector to see what she could find. In her 15 years of searching, her self-proclaimed greatest find was a tangle of 57 dog tags washed up on shore.

Etheridge passed away not long after in 1991 and, after sitting forgotten for 22 years in the house of a relative, the tags were later rediscovered and sent to Angelo’s Angels, a non-profit group based out of California that works to restore lost dog tags to their rightful owners. 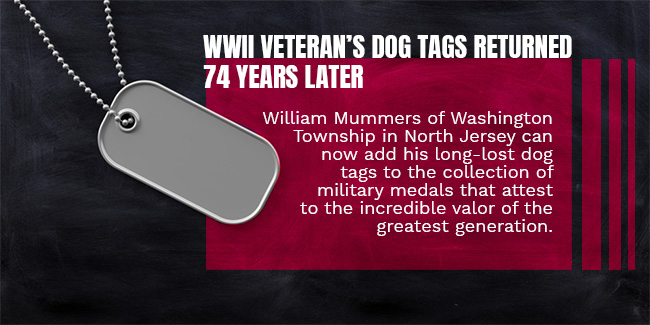 One of the owners was none other than William Mummers, the only living recipient of one of the tags in the cluster found by Etheridge. Nicknamed “Team Ann” in honor of their discoverer, it is the largest collection of tags that Angelo’s Angels has returned.

Now 101 years old, Mummers believes he lost his tag during his training in Florida before leaving for Utah Beach in 1944 and the Battle of Normandy as a member of the 22nd Infantry, 4th Division–the very same division as Theodore Roosevelt Jr.

After D-Day, Mummers went on to continue fighting on the front lines throughout France and Belgium for six months before being injured in October 1944 during the Battle of Hurtgen Forest.

He received both the Purple Heart and a Bronze Star for his service and, after 74 years, can now add his long-lost dog tags to the collection of military medals that attest to the incredible valor of the greatest generation.

Like many of the service men and women who served in the Vietnam War, Lanny Martinson wore one of his dog tags around his neck and the other laced into his boot.

This served two purposes. First, worn together at the neck, tags made a clinking noise that could tip off the enemy as to a soldier’s location. Second, the horrible truth was that the methods used in warfare at the time seldom left a soldier intact and placing the tags in separate locations made the chances of successful identification greater.

Martinson himself is keenly aware of that terrible reality. As a 23-year-old Marine serving in Vietnam at Khe Sanh in 1968, Martinson lost his right leg to an enemy land mine and only realized he had lost his tags in the event after returning home in a wheelchair.

In fact, after suffering from post-traumatic stress disorder and the unfair treatment levied on Vietnam War vets when they returned home, Martinson had all but decided to order a new set of custom dog tags when he received a call that one of his had turned up, nearly 45 years later. 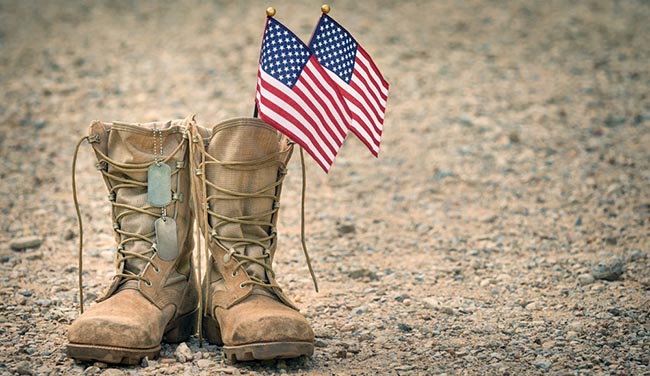 Found along the overgrown airstrip of Khe Sanh, the tags are set to return to their owner thanks to the efforts of Tanna Toney-Farris, a Chula-Vista, California native who is no stranger to returning lost tags to their rightful owners.

With her self-proclaimed soft spot for the military, Tanna has worked to return found dog tags to owners on several occasions. Martinson’s tag changed hands several times before ending up in Tanna’s.

The expert sleuth flooded the internet and numerous veteran sites with posts about the tag in search of Martinson with only his religion, name, serial number and blood type to go on.

Eventually, Martinson was located in Texas, and not a day too soon. Like many Vietnam War veterans, the former Marine had a somewhat cynical view about life as a veteran in the United States when he received the call about his lost tag.

Coupled with the deplorable treatment of returned vets after the Vietnam War and today’s confusion about the true meaning of Memorial Day, Martinson fully believed that people had lost sight of the sacrifice the women and women made while serving in Vietnam.

Tanna’s efforts changed that. The outpouring of heartfelt messages of thanks for his service on the internet during the search for the dog tags’ owner has given Martinson the awareness that his sacrifice has not been forgotten and made him feel welcomed home at last. 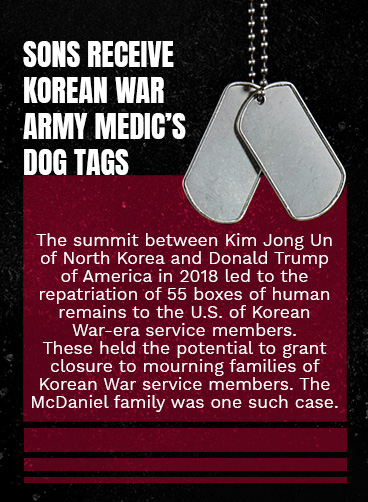 The monumental summit between Kim Jong Un of North Korea and American President Donald Trump in June 2018 led to the repatriation of 55 boxes of human remains to the United States of Korean War-era service members.

The remains held the potential to grant closure to mourning families of Korean War POW and MIA servicemen and women. The McDaniel family was one such case.

Army Master Sgt. Charles H. McDaniel served in Europe during WWII before eventual deployment to Korea in 1950. At the time, his sons, retired Army Chaplain Col. Charles McDaniel and Larry McDaniel, were only two and three years old.

Charles lost his life when the Chinese overran his battalion near Unsan, north of Pyongyang, in October 1950. Of the 7,800 American men and women who have remained unaccounted for since the Korean War, nearly 5,300 of those went missing in North Korea.

Among the 55 coffins that were returned to Pearl Harbor, Hawaii in July 2018 and received by Vice President Mike Pence, one contained the dog tags of Army Medic Charles H. McDaniel.

Though the Pentagon is still working and will continue to work tirelessly to identify the remains, Charles’ dog tag is the only item that investigating officials have been able to connect with one specific soldier so far.

The tag itself speaks to the harsh realities of the conflict with its discolored metal and deteriorated condition. The tags were returned to McDaniel’s two sons, now aged 70 and 71, who recognized the magnitude of the find and were touched to have received a token of their late father’s service so long after his passing.

Too many of the families of the fallen soldiers from the Korean War are still looking for answers concerning their loved ones and the circumstances of their passing. For the McDaniel family, their father’s dog tag–as small of a token as it may seem–has granted them a long sought-after solace and a tangible piece of their father’s selfless service to his country.

Now more than just a rudimentary means of identification, found and returned dog tags are a much-needed reminder. They identify the often-forgotten and taken for granted sacrifice that servicemen and women made and continue to make for their country every day.